Home » Business » SpaceX is about to launch four more astronauts for NASA. Here's what you should know

SpaceX is about to launch four more astronauts for NASA. Here's what you should know 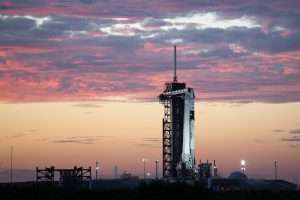 Elon Musk's space company is set to launch the Crew-3 mission for NASA on Wednesday evening, in the fifth SpaceX crewed mission in the past eighteen months.

Crew-3 is set to liftoff from launchpad 39A at NASA's Kennedy Space Center in Florida at 9:03 p.m. ET. After launching, the astronauts are scheduled to arrive at the International Space Station on Thursday at 7:10 p.m. ET.

"Everything looks like we're in a good place to go fly," SpaceX vice president William Gerstenmaier told reporters during a pre-launch briefing.

The launch marks SpaceX's third operational crew launch for NASA to date, and the first by the latest addition to its fleet of Crew Dragon capsules, named "Endurance" by the Crew-3 astronauts. The Crew-3 mission will bring the number of astronauts SpaceX has launched to 18.

NASA and SpaceX have delayed the Crew-3 launch a few times since its previous Oct. 30 target, due to bad weather in the Atlantic Ocean, as well as a minor medical issue with one of the four crew members. The ocean needs to be calm in the direction the rocket is launching, in case a mid-flight abort leads to the capsule splashing down after liftoff. NASA declined to specify more about the medical issue, citing the astronauts' personal privacy, but said that it was not an emergency and unrelated to the Covid-19 virus.

The astronauts from NASA and ESA

Chari, the spacecraft's commander, was selected as an astronaut by NASA in 2017. This will be his first spaceflight, with Chari also picked by NASA as one of its astronauts eligible for future Artemis lunar missions later this decade. Chari is a U.S. Air Force colonel, with more than 2,500 hours of flight time.

Marshburn, the Crew-3 pilot, was selected as an astronaut by NASA in 2004. This is Marshburn's third spaceflight, having flown previously on the Space Shuttle and Russian Soyuz spacecraft. Previously Marshburn was a NASA flight surgeon.

Barron is flying as a Crew-3 mission specialist, having been selected by NASA in 2017. Like Chari, the launch is Barron's first spaceflight – she graduated from the U.S. Naval Academy in 2010, and holds a master's degree in nuclear engineering from the University of Cambridge.

Maurer, the latest international astronaut to fly with SpaceX, joined the European astronaut corps in 2015. This will be his first spaceflight as well.

SpaceX developed its Crew Dragon spacecraft and fine-tuned its Falcon 9 rocket under NASA's Commercial Crew program, which provided the company with $3.1 billion to develop the system and launch six operational missions.

Commercial Crew is a competitive program, as NASA also awarded Boeing with $4.8 billion in contracts to develop its Starliner spacecraft — but that competing capsule remains in development due to an uncrewed flight test in December 2019 that experienced significant challenges.

Crew-3 represents the third of those six missions for SpaceX, with NASA now benefiting from the investment it made in the company's spacecraft development.

NASA emphasizes that, in addition to the U.S. having a way to send astronauts to space, SpaceX offers the agency a cost-saving option as well. The agency expects to pay $55 million per astronaut to fly with Crew Dragon, as opposed to $86 million per astronaut to fly with the Russians. NASA last year estimated that having two private companies compete for contracts saved the agency between $20 billion and $30 billion in development costs.

The company completed a full dress rehearsal for Crew-3 in October, with the quartet of astronauts practicing suiting up and driving out to the launchpad in the pair of Tesla Model Xs that SpaceX uses for crew transportation.

Endurance is a new Crew Dragon capsule debuting for this mission. Previously, capsules "Resilience" and "Endeavour" have flown astronauts, and SpaceX expects to add a fourth Crew Dragon early next year.

While SpaceX has flown a maximum up four people on each mission so far, Crew Dragon is designed to carry as many as seven passengers to space at a time.

SpaceX recently has had incidents with the toilet onboard its Crew Dragon spacecraft, as a hose came unglued in "Resilience" during the Inspiration4 mission – although the crew onboard did not notice the problem during the spaceflight – and the "Endeavour" capsule that returned the Crew-2 mission earlier this week had a similar problem. The company says it updated the design of Endurance's waste management system prior to Crew-3's launch, in an effort to correct the problem.

Crew Dragon's parachutes were also a point of concern, as one of the four main parachutes during Crew-2's return deployed more slowly than the others. Gerstenmaier told reporters that despite the slow opening, the parachute performed as expected – emphasizing that Crew Dragon can splashdown under three parachutes if needed. NASA and SpaceX teams inspected the Crew-2 parachutes after recovering them for the water and looked at data from the flight, with Gerstenmaier saying that nothing was out of the ordinary after the review.

The company plans to continue to reuse its Crew Dragon capsules, having already done so with the Crew-2 and Inspiration4 missions.

Crew Dragon will launch on top of SpaceX's Falcon 9 rocket, with the booster (the large, lower section of the rocket) expected to land on the company's autonomous barge in the Atlantic Ocean.

SpaceX performed a static fire of the rocket on Oct. 28, during which its nine engines were fired for a few seconds while standing on the launchpad.

Falcon 9 has become the workhorse of SpaceX's growing fleet. The rocket stands at nearly 230 feet tall and is capable of launching as much as 25 tons to low Earth orbit. The Falcon 9 series is qualified to fly up to 10 flights, and SpaceX continues to push the boundary of reusability with satellite launches.

Four hours before liftoff, the astronauts will suit up. About a half an hour later, the crew will walk out to their Model X rides, complete with NASA logos, which will drive from the astronaut quarters out to the launchpad.

With 2½ hours to go, the astronauts will strap into their seats in Crew Dragon and begin checking that all systems are good to go. Then, with just under two hours until launch, the hatch to the spacecraft will be closed.

SpaceX will begin loading the rocket with fuel 35 minutes before launch, which will initiate a final series of processes and checks.

A few minutes after liftoff, the Falcon 9′s booster stage will return and attempt to land on the company's barge stationed in the Atlantic Ocean.

If anything were to go wrong in the last half hour before the launch or even during the launch, Crew Dragon will abort and fire its emergency escape system. The company tested that system with no one inside the spacecraft. In that test, SpaceX triggered the system during the most intense part of the launch to show that it could be done at any time.

After arriving at the ISS, Crew-3 will perform a full duration mission, spending about six months onboard.