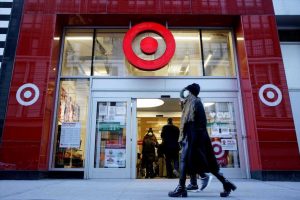 The big-box retailer raised its fourth-quarter forecast, predicting comparable sales could rise at between a high-single digit and low double-digit pace in the holiday period. Previously, it estimated a high single-digit increase.

Shares are up about 1% in premarket trading.

CEO Brian Cornell said on a call with reporters that sales have been strong throughout the year, but have been "punctuated during key seasonal moments." He said he expects that pattern to play out again during the holidays, as consumers buy toys, decorations and food.

Target is keeping its focus on value and absorbing some higher costs, even as inflation makes groceries, fuel and other goods more expensive, Cornell said.

"We are protecting prices," he said. "It's as important to our guests this year as safety has been throughout the pandemic."

Total revenue rose 13% to $25.65 billion from the same period a year ago, slightly above analysts' expectations of $24.78 billion.

Comparable sales in the third quarter grew 12.7%, as shoppers made more trips to Target's stores and visits to its website. That exceeded the 8.2% increase that analysts expected, according to a StreetAccount survey.

Target said sales through its same-day services — which includes curbside pickup service, Drive Up, in-store retrieval of orders called Order Pickup and home delivery service Shipt — grew nearly 60% in the quarter. That's on top of more than 200% growth in the year-ago period.

Cornell said the company is ready for the holidays. He said Target has gotten creative to make sure items arrive at stores and warehouses in time, despite clogged ports. It has contracted some of its own ships, unloaded about 60% of its containers at off-peak times and sent more of its goods to less-trafficked ports in Georgia, Virginia or the Pacific Northwest.

That's led to a nearly 20% or $2 billion increase in inventory year over year, he said.

Target began its first holiday deals in early October and has pledged price matches for early birds. He said the company is bulking up operations by hiring 100,000 seasonal employees, filling 30,000 new supply chain roles and giving about 5 million extra hours to current staff.

"The holiday season is off to a great start, but we've got many weeks in front of us and think we're going to continue to see that strength throughout the holiday season right up to Christmas Eve," Cornell said.