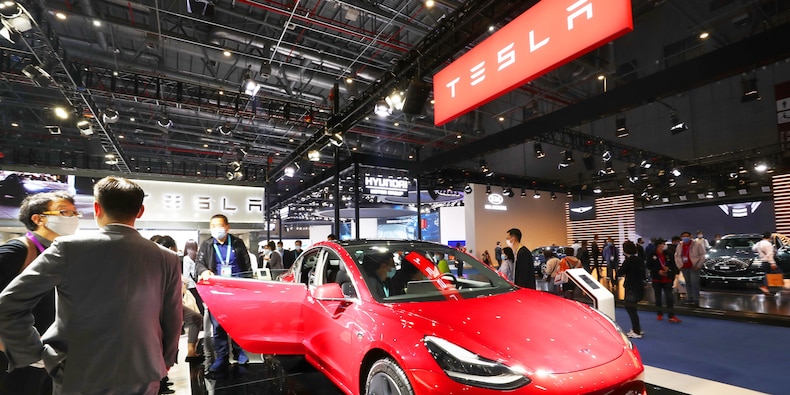 Tesla shares dropped Tuesday after the electric vehicle maker's monthly sales in China fell by on a double-digit percentage basis, setting the stock on course for a second consecutive session of losses.

The company sold 25,845 vehicles made in China in April, a fall of 27% from the 35,478 vehicles sold in March, the China Passenger Car Association reportedly said Tuesday.

In a separate report from Reuters, Tesla, due to uncertainty created by tensions between the US and China, has put on hold plans to buy land to expand its flagship plant in Shanghai into a global export hub. The report cited people familiar with the matter.

Tesla dropped as much as 7.3% to $583.20. Losses on Tuesday would add to the stock's 6.5% drop on Monday when fears of rising inflation prompted a selloff in the broader tech sector. The shares, however, have jumped by roughly 288% over the past 12 months.

The company's share gains stagnated against domestic vehicle makers Nio, Xpeng, and Li Auto in April as the company faced "a handful of negative PR issues in China" related in part to safety issues and a protest at the Shanghai Auto Expo, said Wedbush analyst Dan Ives in a note Tuesday.

"Taking a step back, Tesla is clearly facing chip shortage issues which is putting more pressure on production and logistics to fulfill demand globally and speaks to more cars heading to Europe this month than the Street expected," Ives said, adding that Tesla's overall China demand appears on track for an annual run rate of at least 300,000 units and is poised to represent about 40% of deliveries for Tesla by 2022.

"That said, clearly Musk & Co. need to play nice in the sandbox with Beijing and smooth out PR issues in the region which have been a black eye for Tesla over the last month and clearly impacted China sales negatively in the month of April," said Ives, referring to Tesla's CEO Elon Musk. Wedbush maintained its outperform rating on Tesla and its $1,000 price target.

Meanwhile, Musk on Tuesday tweeted a poll asking his followers if they want Tesla to accept the dogecoin cryptocurrency as payment. Earlier this year, Musk said Tesla would begin accepting bitcoin as payment for its vehicles.