The 30 Best College Towns in America 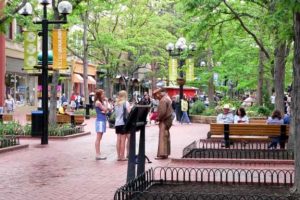 After a year of online classes, thousands of students returned to their college campuses for fall semester classes. The presence of a large student body has an enormous impact on the culture and economy of the cities where large colleges are located.

To identify the best college towns in America, 24/7 Wall St. reviewed U.S. Census Bureau data about the affordability, economic conditions, health, safety, commutability, and arts, entertainment, and dining options in college towns across the country. We considered cities, towns, and villages with at least 30,000 residents and where at least 25% of the population are enrolled in college.

America’s 30 best college towns are spread across 21 different states, many of which are home to their state’s large, public flagship institution. These towns tend to be relatively affordable, safe, and economically prosperous. They also tend to have a wide array of entertainment, arts, and dining options.

The population of a college town tends to have a much higher level of education than the typical U.S. city. All but one of the 30 best college towns have a bachelor’s degree attainment rate higher than the national rate of 32.1%, and some even rank among the most educated cities in the country. This is the most educated metro area in every state.