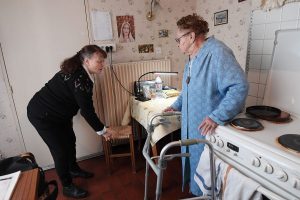 The home-care industry’s staffing crisis has forced its franchise operators to get creative with how they hire and retain caregivers.

In an industry with profit margins that largely depend on Medicaid reimbursement rates and how much people can pay out of pocket, five franchisees from three major home-care companies told Insider they were pulling out all the stops to find new caregivers and keep patient cases staffed.

These operators represent a drop in the ocean of the nation’s fragmented for-profit home-care industry, where no one company owns over 6% of the market.

For new caregivers, some franchisees are bumping up hourly pay, adding sign-on and referral bonuses, and providing other perks to make one of America’s most demanding and underappreciated jobs easier to do long term.

“When your back’s against the wall, you’ll try anything, right?” said Kirk Fisher, who runs a Homewatch CareGivers franchise in Williamstown, Pennsylvania.

Fisher has 86 caregivers on staff, with an “immediate need” for 25 more, he said.

To entice applicants, Fisher raised his hourly rate for new employees by a dollar. His employees are paid $11 to $12 an hour in a state with a minimum wage of $7.25.

Home-care agencies in the US are subject to patchwork regulations and requirements. Depending on their state or county, franchisees may accept low-income Medicaid clients, over-65 Medicare clients (which requires a different federal certification), or only clients able to pay on their own.

Overhead costs, including caregiver training and liability insurance, eat into the $7 or $8 Fisher has left over after paying his caregivers. That means he can’t increase compensation without also raising the cost of home care for clients paying out of pocket.

Fisher said he’d even bought a few SUVs for his employees to use in the rural area where his agency operates after recognizing that some didn’t have their own cars.

Homewatch’s corporate arm is working with its franchisees to convey that it fosters an understanding company culture and underscore the importance of the caregiving it provides, Tucker said, a message often lost on job-search platforms online.

“Home care is a mission-based business,” Tucker said. “Once a caregiver understands the emotional impact of what they’re doing, they tend to stay for a long time.”

Turning to overtime and turning away clients

Rebecca Smith, who runs an Always Best Care franchise in Northern California’s Solano County, said she had 69 employees but needed at least 120 active staff members to meet the demand for nonmedical home care in her area.

To compensate, Smith is offering more overtime to her employees. Smith’s Always Best Care primarily takes clients and their families who can pay out of pocket, though she also coordinates with a community program for veterans.

Smith pays $16 an hour for nonmedical caregivers, meaning California’s Medicaid reimbursement, which she estimated at $14 to $15 an hour, isn’t enough for her to accept Medicaid cases.

Dan Sweiger, a BrightStar franchisee in Southern California, said the staff shortage meant patients in his area have had to delay care or stay in skilled-nursing facilities. Like Smith, he pays his nonmedical caregivers $16 an hour.

“Even though we’re creeping up on pay, we’re also losing margins,” Sweiger said. “Right now we need to start charging more for shorter shifts. We’re going to hold out as long as we can, but it’s costing more and more every day.”

“I had one assisted-living community requesting 111 eight-hour shifts they couldn’t fill themselves,” Sweiger said. “We turned away 500 hours we just couldn’t handle.”

Added perks might not be enough to win over workers

Between the near-term staffing crisis and a long-term increase in demand for home care, the industry faces an uphill battle to expand and remain profitable.

With private-duty clients limited in what they can afford and Medicaid reimbursements largely unchanging, home-care operators have few solutions to their predicament.

US home-care workers have begun to unionize and demand higher wages in the past decade. But employers’ struggles underscore that paying workers more wouldn’t solve all the industry’s problems.

Without significant changes in regulation and funding, the industry and its workers will have to make do with limited resources to keep caring for older Americans. But there are signs of a shift — in a recent survey from the Associated Press-NORC Center for Public Affairs Research at the University of Chicago, 63% of respondents said they supported government funding for home-based care.

And while President Joe Biden’s $400 billion Medicaid proposal to expand access to home care is still light on details, it advocates for home-care-worker unions and higher wages as part of a $2 trillion investment in the nation’s infrastructure.

Some home-care agencies aren’t against paying their workers more. Smith said her caregivers weren’t paid enough, even at a $16 hourly wage.

“Our clients can’t pay either, so it’s a challenge,” she said. “There needs to be a system with this baby-boomer generation somewhere.”