Home » Business » The GOP Dilemma: When Was the Right Time to Part Ways with Trump?

The GOP Dilemma: When Was the Right Time to Part Ways with Trump? 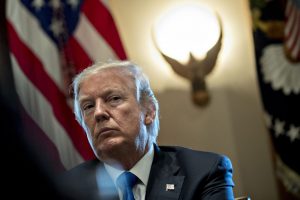 During World War II, the U.S. Army attempted to weed out soldiers who were suspected of being communists because they had fought against the fascist forces of Spain’s Francisco Franco in the 1930s.  Some of those soldiers, then and later, jokingly described themselves as “premature anti-fascists”—that is, they were being persecuted for perceiving the evil of fascism too soon.

No one is calling President Trump a fascist or proto-fascist. Well, on second thought, alot ofpeopleare. But that’s not the point here. The point is that the Republican Party is going to go through the same process as the U.S. Army did in the 1940s: At what point was it right to turn against Trump? Too soon makes you in some people’s eyes a RINO—a Republican in name only. Too late makes you an enabler, in league with dead-enders like Rudy Giuliani, Sidney Powell, and Peter Navarro.

There’s a wide spectrum. Bill and Hillary Clintonattended the wedding of Donald and Melania Trump at Mar-a-Lago in 2005. As recently as 2015 Trump said he would“love to have Oprah,” as in Oprah Winfrey, as his vice-presidential running mate. But it’s safe to say that no one would say the Clintons or Winfrey stuck by Trump’s side for too long.

More relevant are the Republicans who signed on with Trump, hoping for the best. Gary Cohn, the former president of Goldman, Sachs & Co., got out relatively early, resigning as director of the National Economic Council in March 2018. His reputation remains intact: This week IBM Corp. hired him as vice chairman.

Rex Tillerson, the former chief executive officer of Exxon Mobil Corp., resigned as secretary of State in March 2018. Defense Secretary Jim Mattis resigned in protest in December 2018, the same month the White House announced that Chief of Staff John Kelly was “departing.” Defense Secretary Mark Esper resigned just after the 2020 presidential election. Many of the dozens of resignations over the past four years were under pressure from Trump, but that’s not necessarily a black mark on those who left: It could mean they stood up to what they perceived as bad behavior.

The last few days have seen a new wave of resignations. Today Mick Mulvaney, the former White House chief of staff, said he wasresigning as special envoy to Northern Ireland. “I quit because it is the only thing I could do—officially—to express my disapproval of what happened yesterday,” Mulvaney told Bloomberg News. Matthew Pottinger, the deputy national security adviser, alsoresigned today. Those who remain may be arguing to themselves that leaving now, and leaving Trump to his own devices, would only make matters worse.

Republicans in Congress must go through the same reckoning. Senator Mitt Romney of Utah? An early dissenter. Majority Leader Mitch McConnell? Not so early, although on the day of the insurrection he didmanage to say that attempts to overturn the election with violence “would damage our republic forever.” Josh Hawley of Missouri? Still in Trump’s camp. He was captured on camera making a clenched-fist salute to the mob of Trump supporters before they stormed the Capitol—and later insisted on going ahead with a doomed effort to decertify the Electoral College ballots.

It’s strange that the Grand Old Party has been so thoroughly remade in Trump’s image that even though he’s on his way out in disgrace, party identification revolves around when you pulled away from him. To paraphrase the Spanish Civil War veterans, were you prematurely anti-Trump?