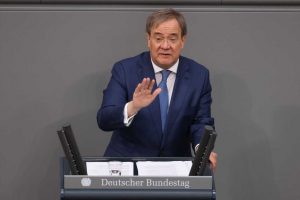 LONDON — The upcoming election in Germany could disappoint other European governments that are looking for more integration in the single currency area — a sensitive topic that many market players are monitoring.

The 19 euro zone nations follow the same monetary rules and share the same currency, but fiscal policies are still mostly decided at the national level. This is often a source of concern every time there's a crisis in the region, simply because it often takes the euro zone longer to coordinate a combined response. These concerns can then be reflected in higher costs when euro governments look to borrow money from public markets.

"The release of the CDU's election manifesto suggests that the next German government is unlikely to push for radical reforms or a deepening of euro zone integration," Carsten Brzeski, global head of macro at ING Germany, said in a note on Tuesday.

The CDU, Chancellor Angela Merkel's party, is currently ahead in the polls with a projected vote of 28%, followed by the Green Party with 20% of the support, and then the socialist SPD party with 16%.

As it stands, the conservative CDU party, and its leader Armin Laschet, will play a key role in the approach Germany takes toward European integration.

For many years, Germany represented one of the most cautious euro members when it came to fiscal integration. The idea that German taxpayers would ultimately have to pay for fiscal mistakes in other, highly indebted, euro zone nations was a taboo among the public and the political landscape.

However, the coronavirus pandemic shifted that dynamic when Merkel decided to back plans for joint-EU debt sales, so more money could be deployed across the EU and limit the economic damage from the crisis.

This exercise — known as the Next Generation fund — has been described as a one-off measure to deal with the unprecedented shock. But at the same time some countries and EU officials believed it was also the first big step toward more fiscal integration.

Market players became more confident about the future and stability of the EU as well when leaders announced in July that the European Commission would be tapping the markets on their behalf.

However, the wind could soon be blowing in a different direction as Germans prepare to choose their new chancellor in September.

The CDU mentions in its manifesto that it is open to a revision of the EU's fiscal rules, but not a softening.

"It in fact argues for a stricter implementation of fiscal rules in the future," and that the European recovery fund "should remain a one-off," Brzeski said.

"On the European level, all (German political) parties want to strengthen European integration — but in different ways. The CDU/CSU seems to stand for a pragmatic 'weiter so' (more of the same)," Berenberg analysts said in a note Tuesday.

Erik Jones, professor of European studies at Johns Hopkins University, told CNBC via email: "In the very short term, the question is when (the euro zone) should deactivate the 'general escape' clause of the Stability and Growth Pact, which would return us to the old fiscal rules. This (CDU) manifesto seems to suggest that should happen as soon as possible once the crisis has passed."

The euro zone agreed in the wake of the coronavirus pandemic to lift rules on budgetary discipline so each capital would have more leeway to respond to the crisis. This decision, known as the deactivation of the general escape clause, will remain in effect until at least the end of 2022.

The CDU's manifesto indicates that Germany may push for the reintroduction of the fiscal rules as early as 2023, even though other euro members are reluctant to return to conservative budgets so soon after the pandemic.

In fact, the commission suggested earlier this month that while indebted nations should keep an eye on their public expenditures, they should also keep up investments.

"The commission's recommendations are in fact a breakthrough, and an important step in the direction of what the new fiscal rules will likely be, attempting to shield public investments for the twin green and digital transitions, but also social investment," analysts at consultancy firm Eurasia said in a note.

One of the big debates for the euro zone later this year will be how to reform the fiscal rules before they are reintroduced.

"The debate will be challenging and consensus won't be easy to reach," Eurasia analysts also said.

However, irrespective of what the euro area decides to do, the new German leader will ultimately have an impact on how the region performs one way or the other.

"If Germany prematurely tightens, it's an issue not just for Germany, it is an issue also for the rest of the euro zone and the European Union," Guntram Wolff, director of the Brussels-based think thank Bruegel told CNBC's "Squawk Box Europe" on Thursday.

Germany is the euro zone's largest economy and it has strong trade and economic links with its neighbors.