The upside to inflation: rising wages 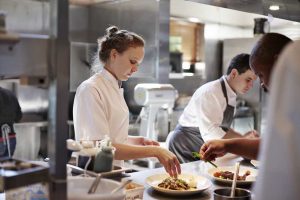 As the economy picks up in the wake of the Covid pandemic, concerns about inflation are also gaining steam.

Already, prices on some goods, like cars, are noticeably higher, stoking fears that a sudden uptick in inflation will decrease purchasing power over time.

Although consumers may pay more for everyday items, it's not all bad news as far as household income and spending goes. Companies facing a labor shortage are also paying more to get workers to walk in the door.

More from Personal Finance:
Americans' inflation fears reach a fever pitch
How to rebuild your finances during an economic recovery
Did state cuts to unemployment aid get people back to work?

"One of the major challenges for employers, along with finding workers, is to retain their current employees and one way to do that is to offer current employees a new opportunity and increased pay," said Mark Hamrick, senior economic analyst at Bankrate.com.

"In the power struggle between workers and employers, the balance has shifted in workers' favor," he said. "We haven't always seen that in the past."

Workers already saw a bump in their paychecks for June. As of the latest tally, average hourly earnings rose 0.3% month over month and 3.6% year over year, according to the Labor Department.

However, incremental wage increases are unlikely to keep pace as the cost of living rises, cautioned David Weliver, founder of personal finance site Money Under 30.

"There's going to be a lag," Weliver said. "The prices at the gas pump or grocery store may change very quickly but you might not get that raise for a year."

Corporations are often slow to raise wages, especially if it's costing them more to buy raw materials, Weliver said. "They'll be feeling a profit squeeze and the last thing they want to do is pay their workers more," he added.

"That's the sticky situation that we get into."

And yet, an acute labor shortage in certain industries, such as leisure and hospitality, adds an unprecedented twist, Weliver added.

On job search site Indeed, 4.1% of companies were offering cash bonuses or other hiring incentives in June, more than double the rate of a year ago. Some food prep jobs even advertised bonuses of $100 to $2,500.

And still, some economists fear a too-rapid increase in wages could prompt companies to raise prices and create the very phenomenon of inflation, causing more harm than good.

President Joe Biden has rejected this view. "A lot of companies have done extremely well in this crisis, and good for them," he said in a speech in May.

"The simple fact is, though, corporate profits are the highest they've been in decades," the President added. "Workers' pay is at the lowest it's been in 70 years.

"We have more than ample room to raise worker pay without raising customer prices."

The Federal Reserve has also downplayed recent inflationary worries, saying they expect the current spate of price pressures to fade over time as the economy gets back to normal.