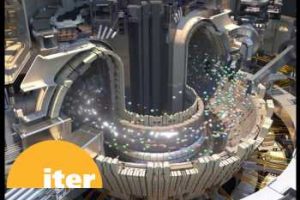 An international nuclear fusion energy project is in the process to replicate Sun’s enormous energy on Earth as a solution to meet the ever-increasing energy needs of the world.

Scientists at the International Thermonuclear Experimental Reactor or ITER in France, a project led by seven main countries, have been working for the past few decades to recreate and sustain nuclear fusion energy that would be equal to the energy inside the Sun’s core.

In a major breakthrough, UK scientists recently generated 59 megajoules of fusion energy for five seconds in a giant donut-shaped machine called a tokamak.

Fusion, which occurs naturally inside the sun, is the process that powers the Sun and the stars. Hydrogen atoms combine under extreme heat and pressure to generate helium atoms. This causes more energy to be released, allowing the process to continue. The sun, made up of a giant burning ball of plasma, the fourth state of matter, fuses an unending amount of hydrogen into helium each second.

Fusion will release limitless forms of clean energy that won’t emit any greenhouse gases like fossil fuels, and won’t produce long-life radioactive waste like the nuclear fission power that is used at present. Utilizing fusion energy would help the world to give up dependence on fossil fuels, which results in a human-made climate crisis.

As per reports, one gram of fuel as input can create the equivalent of eight tons of oil in fusion power, with a yield of eight million to one.

Trials have started early in the 19th century to build machines to replicate the sun and find fusion energy. Though scientists and engineers around the world have managed to recreate huge energy through nuclear fusion reactions over the decades, they failed to sustain it.

In 1968, Soviet Union researchers had created a tokamak, a machine to replicate the fusion process in which two particles that repel by nature would be forced together to create fusion energy. The scientists were able to achieve the high temperatures required and contain the plasma for a sustained period for the first time.

Later, ITER, the world’s largest experimental fusion facility, was formed with the main objective to utilize fusion energy commercially by sustaining it for a longer period. It is designed to demonstrate the scientific and technological feasibility of fusion power.

Since ITER’s conception in 1985, thirty-five countries are collaborating on the project, which is run by seven main members. These include China, the United States, the European Union, Russia, India, Japan, and South Korea.

Europe is contributing almost half of the costs of ITER’s construction, while the other six members of the joint international venture are contributing equally to the rest. The ITER Project is under construction in Saint-Paul-lez-Durance, in the south of France.

Around 4,500 companies with 15,000 employees from all over the globe have been participating in the construction process of the ITER Tokamak, which is the most complex machine ever being built.

At the huge construction site in the southern French region of Provence, ITER’s fusion energy experiments will take place inside the vacuum vessel of the tokamak, a donut-shaped machine.

According to ITER, its vacuum vessel, with an interior volume of 1,400 m³, is unique. The volume of plasma it can contain is fully ten times larger than that of the largest operating tokamak in the world at present. The ITER vacuum vessel will measure 19.4 meters across the outer diameter, 11.4 meters high, and weigh approximately 5,200 tonnes. The vacuum vessel will weigh 8,500 tonnes with the installation of in-vessel components such as the blanket and the diverter.

Meanwhile, in February, UK scientists in the English village of Culham, near Oxford, reached a historic moment. The UK tokamak called the Joint European Torus, or JET generated and sustained 59 megajoules of fusion energy for five seconds.

The work is progressing at ITER, where a major machine assembly milestone was reached on May 11. The first of the nine modules required for the tokamak’s torus-shaped vacuum vessel was positioned with sub-millimetric precision on its supports. The first sub-section of the ITER plasma chamber was successfully lifted out of tooling and lowered into the machine well.