Home » Business » These Are the Current Members of NATO 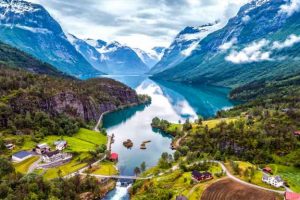 Just a day after Türkiye (now the formal name of Turkey) dropped its objections to Finland and Sweden joining the North Atlantic Treaty Organization, leaders of the Western military alliance formally invited the two Nordic countries to join on June 29. It could take several months for current NATO members to ratify any deal.

The move would be one of the most profound expansions of NATO in years – Finland shares a border with Russia, and Sweden is in close proximity. Russia has long complained about NATO’s rapid eastward expansion and has accused the West of betraying reassurances made in 1990 not to expand the alliance beyond East Germany.

Finland shares an 830-mile (1,340-km) border with Russia, and at its closest point is about 124 miles (209 km) away from Saint Petersburg, Russia’s second-largest and strategically important city. (Here are 20 wars Russia has fought since 1917.)

Sweden and Finland have, for decades, remained neutral regarding NATO expansion, but following Russia’s attack and invasion of Ukraine, the two countries applied for refuge inside NATO’s protective sphere. Nordic neighbors Denmark, Norway, and Iceland were among the dozen states that established NATO in 1949. Türkiye joined the alliance in 1952. (Ukraine is not a NATO member, but many member states have helped Ukraine in its fight. Here’s how the U.S. is arming Ukraine.)

Turkish President Recep Tayyip Erdogan agreed to lift his country’s opposition to Sweden and Finland’s membership after NATO made concessions to crack down on the activities of the Kurdistan Workers’ Party, or PKK, that Turkey considers a terrorist organization. Sweden has expressed support for the PKK, an organization that considers itself an independence movement but that has also attacked Turkish nonmilitary targets and has killed Turkish civilians.

To determine the countries already in NATO, 24/7 Wall St. reviewed the NATO website to compile a list of current member nations and the year that they joined. Population data came from The World Bank and is for the most recent year available.