Home » This Is the Noisiest Job in America

This Is the Noisiest Job in America 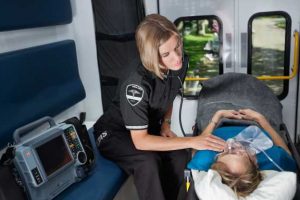 The COVID-19 pandemic has highlighted the personal risks many workers take simply by performing their job. Even before the pandemic, many jobs in America required workers to take on some amount of risk to their personal health and safety in order to work. The Centers for Disease Control and Prevention (CDC) estimates that 22 million Americans are exposed to one particular hazard at work — noise.

Noise levels that get above 85 decibels (dBA) are considered to be unsafe and potentially damaging to one’s hearing. For context, a normal conversation is around 60 dBA, and lawnmowers reach about 90 dBA.

The U.S. Occupational Safety and Health Administration (OSHA) has set two limits on workplace noise. At the Action Level of 85 dBA, OSHA requires employers to cut back on noise and implement hearing conservation programs, such as providing hearing protection. OSHA set the Permissible Exposure Limit at 90 dBA, meaning that most workers can avoid negative effects as long as their work environment does not cross this threshold. Despite these warnings and requirements, there are dozens of jobs in which the average eight-hour workday exceeds one or both of these thresholds.

To determine the noisiest job, 24/7 Wall St. reviewed data on noise exposure by occupation from the University of Michigan’s Job Exposure Matrix. Occupations were ranked based on the average level of exposure to noise in decibels for all workers throughout an eight-hour workday.

Nearly half of the jobs that rank among the finalists for the noisiest in America are production occupations, including machine assemblers, food processing workers, machinists, woodworkers and more. These jobs require the use of large, noisy machinery, and workers are exposed to constant noise pollution throughout the day.

Many of the loudest jobs in the country have a number of drawbacks in addition to the high noise levels. The vast majority of these jobs do not pay well, with an annual median wage of less than $40,000.

A number of the jobs that rank among the noisiest are also hazardous for other reasons. The same large machines that produce excessive noise also can be physically hazardous.

The noisiest job is in the emergency medical technicians and paramedics sector. Some data about these jobs:

No job faces more consistently noisy working conditions than emergency medical technicians and paramedics. These workers are first responders to medical emergencies, and they perform medical care and transport patients to medical facilities.

To determine the noisiest jobs, 24/7 Wall St. ranked occupations based on the average level of exposure to noise for all workers, measured in A-weighted decibels. Data on dBA was averaged across all years for which data was available.

Imputed data with a high level of confidence was included, while imputed data with a low to moderate level of confidence was excluded. Noise exposure was compared against the OSHA’s permissible exposure limit of 90 dBA during an eight-hour workday. Data on total employment and median annual wage came from the Bureau of Labor Statistics (BLS) May 2019 Occupational Employment Statistics program. Data on projected employment growth from 2019 to 2029 came from the BLS Employment Projections program.

Click here to see 24 jobs that could ruin your hearing.