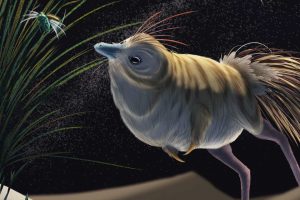 While most dinosaurs were thought to hunt primarily during the day, a little bird-like dinosaur may have been strictly a night hunter, a new study suggests.

The dinosaur in question, Shuvuuia deserti, was a small critter, about the size of a chicken, and it lived in the deserts of what is now Mongolia about 65 million years ago.

Shuvuuia’s skeleton is among the most bizarre of all dinosaurs, the study said. It had a fragile, bird-like skull, brawny, weightlifter arms with a single claw on each hand, and long, roadrunner-like legs.

“Nocturnal activity, digging ability and long hind limbs are all features of animals that live in deserts today,” said study lead author Jonah Choiniere, a University of the Witwatersrand scientist. “But it’s surprising to see them all combined in a single dinosaur species that lived more than 65 million years ago.”

It also had some of the proportionally largest pupils ever measured in either birds or dinosaurs.

“For many decades, dinosaurs were considered to be day-active,” study co-author Lars Schmitz, a biologist at the W.M. Keck Science Department in California, said in a statement. “Now we’re adding new evidence that some small, predatory dinosaurs could have been night-active instead, which changes the thinking about diurnal and nocturnal dinosaurs.”

The new study investigated how vision and hearing abilities of dinosaurs and birds compared. Researchers used CT scans and detailed measurements to collect information on the relative size of the eyes and inner ears of nearly 100 living bird and extinct dinosaur species.

To measure hearing, the team measured the length of the lagena, the organ that processes incoming sound information. The barn owl, which can hunt in complete darkness using hearing alone, has the proportionally longest lagena of any bird today.

In fact, the extremely large lagena of Shuvuuia is almost identical in relative size to today’s barn owl, suggesting that the dino could have hunted in complete darkness.

The study said that Shuvuuia’s vision and hearing were not at all ideal for the daytime. Schmitz explained that the dinosaur’s extraordinary hearing and night vision were beneficial for life in the desert, where high daytime temperatures discouraged daytime hunting.

“We think it would have stalked its prey – small mammals – at night when the temperatures were cooler,” Schmitz told CNN.

“This discovery is a great example of how evolution functions,” Schmitz said. “It represents a solid understanding of how eyes and ears evolve in response to animals’ specific environments.”

The study was published Thursday in the peer-reviewed journal Science, a publication of the American Association for the Advancement of Science.