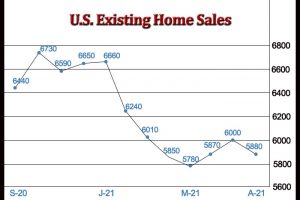 The National Association of Realtors released a report on Wednesday showing a pullback by U.S. existing home sales in the month of August.

NAR said existing home sales slumped by 2.0 percent to an annual rate of 5.88 million in August after jumping by 2.2 percent to a revised rate of 6.00 million in July.

Economists had expected existing home sales to decrease by 1.7 percent to a rate of 5.89 million from the 5.99 million originally reported for the previous month.

“Sales slipped a bit in August as prices rose nationwide,” said NAR’s chief economist Lawrence Yun. “Although there was a decline in home purchases, potential buyers are out and about searching, but much more measured about their financial limits, and simply waiting for more inventory.”

The unsold inventory represents 2.6 months of supply at the current sales pace, unchanged from July but down from 3.0 months in August of 2020.

The report also showed single-family home sales fell by 1.9 percent to an annual rate of 5.19 million in August, while existing condominium and co-op sales tumbled by 2.8 percent to a rate of 690,000.

On Friday, the Commerce Department is scheduled to release a separate report on new home sales in the month of August.