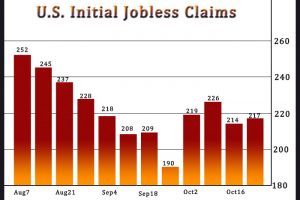 The Labor Department released a report on Thursday showing a modest increase in first-time claims for U.S. unemployment benefits in the week ended October 22nd.

The Labor Department said the less volatile four-week moving average also rose to 219,000, an increase of 6,750 from the previous week’s unrevised average of 212,250.

Continuing claims, a reading on the number of people receiving ongoing unemployment assistance, also climbed by 55,000 to 1.438 million in the week ended October 15th.

The increase lifted continuing claims to their highest level since hitting 1.474 million in the week ended April 2nd.

“While there have been some signs of a loosening in labor market conditions, the job market overall remains tight,” said Nancy Vanden Houten, Lead U.S. Economist at Oxford Economics. “Even as the economy slows, employers appear to be reluctant to lay off workers that they have struggled to hire and retain.”

She added, “We don’t look for claims to fall much below current levels, but we don’t look for a significant rise in claims or unemployment either until we enter a recession in 2023.”

Next Friday, the Labor Department is scheduled to release its more closely watched monthly employment report for October.

Economists currently expect employment to increase by 200,000 jobs in October after jumping by 263,000 jobs in September, while the unemployment rate is expected to inch up to 3.6 percent from 3.5 percent.