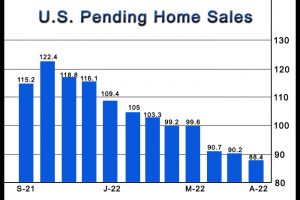 A report released by the National Association of Realtors on Wednesday showed pending home sales in the U.S. fell for the third straight month in August, with the decrease exceeding economist estimates.

Economists had expected pending home sales to tumble by 1.4 percent compared to the 1.0 percent slump originally reported for the previous month.

Compared to the same month a year ago, NAR said pending home sales in August were down by 24.2 percent.

A pending home sale is one in which a contract was signed but not yet closed. Normally, it takes four to six weeks to close a contracted sale.

“The direction of mortgage rates – upward or downward – is the prime mover for home buying, and decade-high rates have deeply cut into contract signings,” said NAR Chief Economist Lawrence Yun.

He added, “If mortgage rates moderate and the economy continues adding jobs, then home buying should also stabilize.”