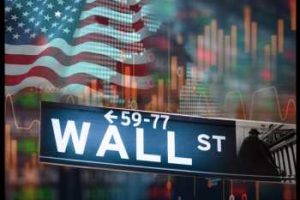 After showing a lack of direction early in the session, stocks moved modestly higher over the course of the trading session on Monday. With the upward move, the major averages all reached new record closing highs.

The modestly higher close on Wall Street reflected recent upward momentum, which has helped propel stocks to record highs despite uncertainty about the global economic outlook.

A lack of major U.S. economic data may kept traders on the sidelines, however, with traders looking ahead to the release of reports on consumer and producer price inflation, industrial production and retail sales in the coming days.

Congressional testimony by Federal Reserve Chair Jerome Powell is also likely to attract attention along with the Fed’s Beige Book.

Traders may also have been reluctant to make significant moves ahead of the start of earnings season, with several big-name companies due to report their quarterly results this week.

Semiconductor stocks showed a strong move to the upside on the day, driving the Philadelphia Semiconductor Index up by 1.2 percent.

Notable strength was also visible among financial stocks, with the KBW Bank Index and the NYSE Arca Broker/Dealer Index rising by 1.2 percent and 1.1 percent, respectively.

On the other hand, gold, networking and biotechnology stocks moved notably lower on the day, limiting the upside for the broader markets.

The major European markets also moved to the upside on the day. While the U.K.’s FTSE 100 Index inched up by 0.1 percent, the French CAC 40 Index and the German DAX Index rose by 0.5 percent and 0.7 percent, respectively.

In the bond market, treasuries showed a lack of direction following the pullback seen last Friday. As a result, the yield on the benchmark ten-year note, which moves opposite of its price, crept up by less than a basis point at 1.363 percent.

Trading on Tuesday may be impacted by reaction to the Labor Department’s report on consumer price inflation in the month of June.