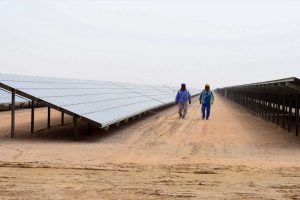 The UAE, one of the world's largest producers of crude oil, is lobbying to host the Council of Parties (COP28) global climate summit in Abu Dhabi in November 2023. The event is held annually and brings together global leaders to deliberate climate policy.

"The climate challenge is daunting, but it is also matched by enormous opportunity to drive economic growth and job creation," Abdullah bin Zayed Al Nahyan, UAE Minister of Foreign Affairs and International Cooperation said in a statement.

"As COP28 host, the UAE would leverage its experience as a regional and global convener to mobilize all actors in achieving the Paris Agreement and reinforcing the compelling investment case for raising ambitions," he added.

The UAE plans to increase its oil production capacity to more than 5 million barrels per day by 2030, and is constructing a coal fired power plant. Nevertheless, its pitch to host COP28 seeks to elevate its efforts to make climate action a pillar of its domestic and foreign policy and national economic strategy, according to a 19-page official document reviewed by CNBC.

The UAE has already allocated more than $1 billion in grants and low-interest loans for renewable energy innovation to 70 countries. It plans to use the conference to focus on the economic benefits of accelerated climate action – a key consideration as countries emerge from the COVID-19 pandemic.

The United Kingdom is set to host the COP26 summit in Glasgow in November, billed as the most important since the singing of the Paris Accords in 2015. Under the UN regional rotation system, a yet-to-be-determined African nation is scheduled to host COP 27 next year.

Playing host for COP28 would be an achievement in the climate sphere for the Middle East – the world's hottest, driest and most water-scarce region. By 2030, temperatures are expected to increase more than twice the global average.

The UAE's push also comes amid intensifying regional and global climate diplomacy, which has been amplified by a change of administration in the U.S. and the COVID-19 pandemic.

"By hosting COP28 in the UAE, we hope to leverage our experience and capacity to support and increase global climate ambition, while maximizing the economic benefits both regionally and globally," said Hana Al Hashimi, spokesperson for the Office of the UAE Special Envoy for Climate.

The UAE was the first country in the region to sign and ratify the Paris Agreement, and the first in the region to commit to cutting emissions as part of its Nationally Determined Contribution within the accord. It's also home to the largest single-site solar facility in the world, the region's first green hydrogen plant, a large-scale carbon capture project, the Abu Dhabi based International Renewable Energy Agency and the renewable energy company, Masdar.

"It's a fact that our prosperity as a country has been anchored by the blessing of a fossil fuel economy," Masdar CEO Jameel Al Ramahi told CNBC on Tuesday. "While we are thankful to the blessing that we have and the wealth that we created through fossil fuels, we are also committed to the future," he said.

"At a time when IRENA's vision for the energy system of the future is fast becoming the mainstream path to limiting temperatures to 1.5 degrees, hosting COP will further strengthen the UAE's role in the global energy transition," International Renewable Energy Agency Director-General Francesco La Camera told CNBC.