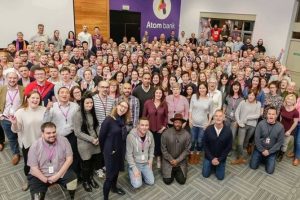 Atom announced the shift late last year which sees employees work 34 hours a week over four days, down from 37.5 hours over five days, with no cut in pay. Chief executive Mark Mullen said so far it was “too early to declare victory” but there were “good reasons to be optimistic and cheerful”. According to surveys of the bank’s staff 86 percent report looking forward to going to work, up from 77 percent. The bank also reports lower short term sickness and customer complaints as well as a boost in recruitment.

Staff numbers have increased to over 460 after the bank had 70 vacancies at one stage.

Mr Mullen said: “In a nutshell, it’s about competing for talent and retaining people, and ultimately being successful, because people are our business.”

Lauren Thomas, economist at jobs insight platform Glassdoor, said: “The UK is in the midst of a historically tight labour market and as companies struggle to attract and retain talent, a four-day working week is definitely one way to stand out.

“Glassdoor data has shown that work-life balance is of key importance to workers and as the market is currently in the job seekers favour, companies may need to consider a more flexible approach to work.”

Although announced as a three-month trial, Mr Mullen was clear the four day week was a “commitment and not an experiment.”

“I have no doubt in my mind that if Atom people want to make the four-day working week a success, we’ll make it a success” he added.

Mr Mullen himself is one of the 95 percent of staff who have opted into the four day week, which had been done on a voluntary basis.

While seeming to work so far for Atom Bank, Ms Thomas predicted four day weeks could prove difficult in some industries, particularly if it also involved a reduction in hours overall.

She explained: “Some work, like many skilled or manual labour jobs, would be difficult to accomplish in fewer working hours and would require longer shifts if fewer days were the norm unless productivity in that industry improves.

“Other work, such as roles in tech, could be well-suited to a 32-hour working week, particularly if workers chose to cut time previously spent in unproductive meetings or ‘busy work.’

“The move to more remote or hybrid work environments may aid in this shift, as the pressure to put in unproductive hours at the office simply for the sake of looking busy lessens.”

Four-day weeks are also being trialled elsewhere in the world including by Unilever in New Zealand and Reykjavik City Council in Iceland.

In Scotland the Scottish National Party also voted last year to back plans for a four-day week trial.

Anne-Marie Lister, Chief People Officer at Atom, said: “We want and expect to see more companies introducing increasingly flexible working practices in 2022, as people continue to reconsider what they want from their careers.

“COVID-19 continues to impact us all, and we believe companies can do more to help their employees maintain a healthier work/life balance.”