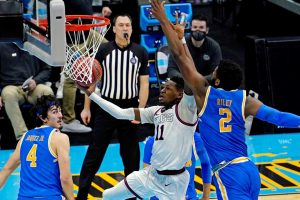 You kept waiting for the dam to break and it never did. Not in the first half. Not deep into the second half. Not even in overtime. UCLA kept trading punches with No. 1 Gonzaga and not backing down.

Surely, the unbeaten Bulldogs were going to make one of its patented runs and pull away. That run never came.

Gonzaga would take the the lead. UCLA would respond with a three. The Bulldogs hit two baskets in a row. The Bruins knock down a tough, fade-away jumper in the lane.

Even when Gonzaga pushed its lead to seven in the second half  — its largest of the game — UCLA responded with six points in a row. The Bruins would eventually lead by two with less than three minutes.

It was crunch time for the Bulldogs. They were facing a pressure that hadn't all year. Not only might they miss out on winning the school's first national title, they could lose their chance at history by becoming the first team since Indiana in 1976 to finish the season without a loss.

They battled back to tie the game. It would go to overtime and an improbable three-pointer by Jalen Suggs would win the game for Gonzaga 93-90 at the buzzer.

Now comes the big question. Was this a sign of cracks in Gonzaga or was this exactly what the Bulldogs needed before Monday's national championship showdown with Baylor?

You couldn't blame the Bulldogs for being a bit overconfident when the game tipped. UCLA was the highest seed to reach the Final Four, matching four others that started the tournament as a No. 11. None of the previous four had won their semifinal game.

Gonzaga, a 14-point favorite, had won 27 consecutive games by double figures. The only one of its 30 previous victories that was by single digits came Dec. 2 against West Virginia.

They quickly found out that this was not going to be an easy night. 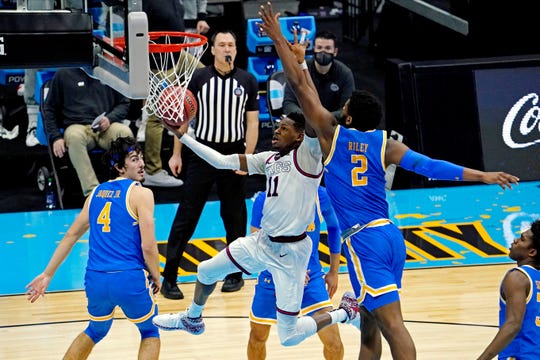