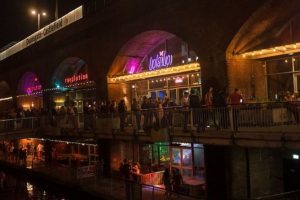 Pressures will also see costs begin to be passed onto consumers with big price increases to come in the new year. Speaking to Express.co.uk Mr Lord explained hospitality was “not in a good place” with many expecting it would take at least three years to get back to pre-pandemic levels. “I know many people who are operating on a knife-edge and they are telling me with another 7.5 percent increase they would have to close. It’s make or break for them.” VAT is currently 12.5 percent for the hospitality industry following a temporary pandemic cut to five percent. Under current plans it will return to 20 percent in April next year.

Mr Lord argued the increase was too fast calling for it to be extended at least two and a half years.

The Parklife festival founder explained many businesses were being squeezed by higher costs but were unable to pass these on to customers in the run-up to Christmas as many had pre-booked at fixed prices.

Next year though he warned many operators would be forced to try to recoup these from customers.

“Come January we’re going to see a definite price increase and I think ultimately the customer will vote with their feet and I don’t blame them.

It echoes comments made last week from the head of UK Hospitality Kate Nicholls of multiple reports of businesses planning three waves of price increases before April next year.

As well as growing supply costs hospitality has also been hit by staffing shortages.

Data out this morning from the Office for National Statistics found job vacancies had risen to record highs prompting fears over the ability of businesses to find the workers they need.

Head of Economics at the British Chambers of Commerce Suren Thiru commented: “Record job vacancies suggest that the chronic staff shortages encountered by businesses are intensifying and this could derail the recovery by forcing firms into a more long-lasting decline in their operating capacity.”

Mr Lord said this was becoming very evident in hospitality despite the festive season usually being one of the busiest periods.

“I know many many venues across the UK that are limited.

Another feature to emerge in the ONS’s job market data has been the numbers of people moving jobs, dubbed the great resignation by some.

Businesses are now fighting to offer higher wages in a bid to retain staff with Mr Lord citing the example of security staff now receiving up to £17 an hour, up from a previous average of around £10.

“We’re seeing this with a lot of operators now to make sure they get enough waiters or waitresses or chefs or management, they are paying more.

“So the wages are going up, we know operators are paying more for the supply chains, VAT is increased and ultimately the customer is going to end up paying more.

“And I don’t think it’s sustainable.”

According to Mr Lord one area of England has helped the night time economy though is through the decision to scrap vaccine passports.

Scotland meanwhile introduced these meaning anyone entering a nightclub has to show proof of being double jabbed something Mr Lord described as “wrong” adding it “killed off spontaneity.”

He explained this was the safest option but it was key to include the option of using a lateral flow test.

Scotland’s Deputy First Minister John Swinney recently confirmed the Scottish government was considering whether to allow a negative lateral flow test as an alternative to proof of vaccination.

Speaking in a Covid update today Nicola Sturgeon said: “All of our decisions are motivated by a desire to get through what will be a challenging winter without having to re-introduce any restrictions on trade.”