Home » Vaccines 2.0: Next generation COVID shots will be cheaper, easier to deliver and protect against more viruses, industry leaders say

Vaccines 2.0: Next generation COVID shots will be cheaper, easier to deliver and protect against more viruses, industry leaders say 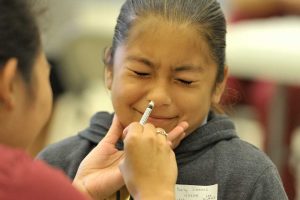 The COVID-19 vaccines are among the best ever created. They’re safe and more than 90% effective at preventing any disease, and even more so at blocking serious illness and death.

Now drug companies are trying to make them even better.

Some future shots will be more effective against certain variants of the SARS-CoV-2 virus that causes COVID-19. Others are aiming to cover several types of severe respiratory viruses, including the first SARS, which caused outbreaks between 2002 and 2004, or even all viruses in the larger coronavirus family.

Companies are testing vaccines that won’t need to be kept cold, won’t require two shots, will have fewer side effects, can be produced more efficiently and can be delivered without needles to make them easier to provide in rural areas and the developing world.

“There’s a long history within vaccinology of second-generation vaccines being multiply improved over first-generation vaccines. That’s just the way things go,” said Scot Roberts, chief scientific officer of Altimmune, a biotech based in Gaithersburg, Maryland, that is developing an inhaled vaccine.

None of these second-generation COVID-19 vaccines will be ready until at least later this summer, and many, including Altimmune’s, not until early next year at the soonest. No single vaccine will have all the desired attributes, a number of experts said.

But with potentially every one of Earth’s nearly 8 billion inhabitants needing one or two initial doses and potentially boosters, there’s plenty of room for different approaches, a number of experts said.

“Depth and breadth” is what vaccinologist, pharmacist, and public-health leader John Grabenstein said he wants in a second-generation vaccine. He expects protection against a number of different variants and respiratory diseases and, ideally, a decade or more between shots.

The jury is still out on how long the current vaccines will last – or whether we’ll even need boosters at all, said Scott Hensley, a viral immunologist at the University of Pennsylvania Perelman School of Medicine. “Time will tell,” he said.

But most companies investing in COVID-19 vaccines are presuming – even banking on the idea – that regular boosters will be necessary.

Stanley Erck, president and CEO of Novavax, which plans to release its vaccine’s effectiveness data soon, said his company’s studies in monkeys show that giving a booster dose a year after initial vaccination yields “spectacular results.”

“I think we’re going to want to do that with humans,” he said. “This isn’t going to go away from a commercial point of view anytime in the future.”

COVID-19 will not be a pandemic forever, but the virus that causes it will probably be around indefinitely, like the flu, said Dr. Paul Offit, director of the Vaccine Education Center at Children’s Hospital of Philadelphia.

“Are we going to need to give a vaccine as long as this virus exists in the world? I think the answer to that question is yes,” Offit said. “So you’re talking about decades, I would imagine.”

The problem is not with current vaccines, which are better than anyone would have predicted. “This is the most amazing scientific achievement in my lifetime,” Offit said. “And I’m old. My lifetime includes the polio vaccine.”

But viruses change, immunity fades and there’s always room for improvement, he said.

To understand the how long immunity lasts, researchers generally look at antibodies in the blood, which begin to dwindle a few months after infection and to a lesser extent, vaccination. The immune system has a second line of defense, so-called T cells, which aren’t as easily studied, said Dr. Betty Diamond, an immunologist and rheumatology expert at the Feinstein Institutes for Medical Research in New York.

“If those are good, we may be protected for lots longer than the antibodies suggest,” Diamond said.

Leaders in the vaccine race aren’t waiting around until protection wanes. They’re already experimenting with the best ways to make boosters.

It’s not clear yet which approach will be the most effective, but several companies, including Moderna, are testing whether people are better protected if they receive an additional dose of the same vaccine, or a shot tailored to one or more of the variants now circulating.

Vehicles line up for COVID-19 vaccinations at El Punto en el Chamizal on May 24, 2021 as 50-to-59 year-olds receive the first dose in Ciudad Juarez. (Photo: Omar Ornelas, El Paso Times)

Moderna, the maker of one of the three COVID-19 vaccines authorized for use in the U.S., also is using artificial intelligence and machine learning to try to predict future mutations that could cause problems and design vaccines to address them, said Melissa J. Moore, Moderna’s chief scientific officer for platform research.

It’s not yet clear how many different variants and viruses the mRNA vaccines like Moderna’s can protect against simultaneously, but Moore thinks she can make at least six vaccines in one, and maybe 10. Some could cover SARS-CoV-2 variants, along with several flu strains and other respiratory viruses.

Any revised Moderna vaccine also will include a lower dose than the original, Moore said. The company went with a high dose in its initial vaccine to guarantee effectiveness, but now, she said the company is confident the dose can come down, reducing side effects without compromising protection.

One of Moderna’s co-founders, MIT professor Robert Langer, also is known for his research on microneedles, tiny Band-Aid-like patches that can deliver medications without the pain of a shot. Moderna has said nothing about future delivery plans, but it seems conceivable the company might try to combine the two technologies to provide a booster that doesn’t require an injection.

Both Moderna’s vaccine and one by Pfizer-BioNTech, which were the first authorized in the U.S., were rapidly made, highly effective and based on a technology called messenger RNA. But a German company, CureVac, which started working in mRNA years before the others, is trying to catch up and maybe leap ahead in the booster market.

CureVac’s initial effectiveness and safety data is due out any day, but the company already is focused on its second-generation vaccine, which it expects to be ready for market by the end of this year at the latest, said Mariola Fotin-Mleczek, the company’s chief technology officer.

The second version of the CureVac vaccine will trigger a higher immune response than the first at a lower dose, and won’t have the cold storage issues of the other mRNA vaccines, Fotin-Mleczek said. It’s still unclear whether one or two doses will be needed for long-term protection, she said.

CureVac’s vaccine should be appealing to low- and moderate-income countries, she said, because its low dose will keep it relatively inexpensive and storage requirements will make it easy to distribute.

By putting out the first-generation vaccine this summer, the company hopes to have any production issues worked out by the time the second version is ready later this year, she said.

Counting on at least some long-term need for boosters, GlaxoSmithKline is contributing to three vaccines made by other companies, including CureVac, getting “several shots on goal,” as Roger Connor, president of GlaxoSmithKline Global Vaccines put it. GSK makes a so-called adjuvant, which can be added to a vaccine to make it work more effectively at a lower dose.

GSK and another partner, Medicago, a biopharmaceutical company based in Quebec City, Canada, recently released mid-stage clinical data suggesting their plant-derived vaccine is safe and potentially effective against COVID-19.

GSK also is pairing with Sanofi for a vaccine that launched a definitive trial Thursday to prove safety and effectiveness. That trial, which will include 35,000 adult volunteers from the U.S., Asia, Africa, and Latin America, will be conducted in two phases, the first testing against the original virus and the second against a variant first seen in South Africa.

The pair hope their vaccine can be used as a first-line priming dose, but also plan to test it as a booster for people who have already been vaccinated, because, Connor said, “it’s too soon to tell what will be needed.”

Several companies are working on vaccines that can be delivered without the needles that send shivers down some people’s spines.

A nasal spray makes sense, proponents say, because COVID-19 is transmitted through aerosols and droplets that can enter the body via the nose and then travel into the respiratory tract. This area is lined with mucus and building up what’s called mucosal immunity should prevent infection with the virus.

A vaccine delivered through the nose is also likely to avoid side effects – like fever and muscle aches – that can accompany shots in the arm, said Altimmune’s Roberts. In trials of intranasal flu vaccines, he said, side effects were so mild that there was no difference seen between the active vaccine and a saline placebo.

An inhaled vaccine with limited side effects also will be useful for protecting younger children, who aren’t yet eligible for COVID-19 vaccines, Roberts said. Children, who, of course, hate shots, are less likely to fall seriously ill from COVID-19, so reducing side effects improves the vaccine’s risk-benefit ratio for them.

A vaccine like the one his company is developing also will have advantages in countries without many financial resources, he said. Altimmune’s vaccine won’t require freezing or even refrigeration for weeks at a time, and can be delivered without a highly trained medical professional, he said.

The company expects to release early-stage trial data next month and, if all goes well, to apply for Food and Drug Administration approval early next year. Altimmune is testing both one and two doses, but hopes that one will be enough, Roberts said.

While most vaccines target the distinctive “spike” protein on the outside of the SARS-CoV-2 virus, a candidate COVID-19 vaccine from ImmunityBio includes a second target on the virus, hoping to avoid problems with variants and to stimulate more of a long-term T cell response.

The Culver City, California-based company is trying four different delivery routes – a shot, an under-the-tongue droplet, a pill and a nasal spray – and envisions mixing and matching, according to the company. Maybe an injection will be followed by a nasal spray to reduce both the chance of infection and the potential spread of the virus through the respiratory tract.

A trial approved last week will test the vaccine as a booster for previously vaccinated South African health care workers, according to a company press release.

Hensley, of Penn, said the future will depend on how much the virus changes over time and how long immunity from the first generation of vaccines lasts.

It makes sense for companies to invest money and research into next-generation vaccines, but the more immediate issue is providing the already available vaccines to more people, he said. “We have a real, tangible solution to what’s presented to us now and it’s just a matter of getting the vaccine out there.”