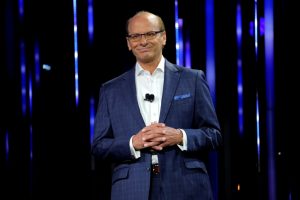 “There’ll be a time for that,” he replied to the Wall Street firm’s Doug Mitchelson when the analyst asked about media reports about “aggressive” pricing asks by the company. “We never talk about the market while we’re in the market.” A day earlier, top execs from NBCUniversal, Fox and Paramount all affirmed at the same conference that they were seeing high-single-digit increases in upfront ad prices and are on the verge of wrapping up the process.

Steinlauf did offer some color and commentary about the newly merged company, noting that the Discovery teams he led were only able to start analyzing ad data from WarnerMedia on April 11, the Monday after the close of the $43 billion merger, with the upfront season an immediate priority. In upfront conversations with media buyers, he said, WBD has offered a package of linear, streaming and digital inventory under the name Premiere.

“We have a different paradigm this year,” the exec said. “The way we’ve chosen to go to market with Premiere is not the way advertisers normally buy mixes. This is a mix that consists of sports, entertainment, lifestyle, news, some syndication.” (Warner Bros Television is a producer of Jennifer Hudson’s upcoming syndicated talk show, which it made a centerpiece of its upfront presentation last month.)

Given the assortment of options, Steinlauf continued, “This is a process that requires more complexity than we’ve seen in the past. However, they really like what we’re doing because we’ve created a one-stop shop of all of these great brands.”

Steinlauf, who worked at Turner Sports earlier in his career, more recently headed sales at Scripps Networks Interactive. Discovery bought the former parent of Food Network and HGTV in 2018 and Steinlauf was installed as the new company’s head of sales.

“Sometimes, as a company gets bigger and bigger, you lose sight of what’s really valuable, these gems of networks,” he said. “There’s incredible emotion with these channels.”

The 24 to 25 linear TV channels under the WBD umbrella are “still the core of the business,” Steinlauf said. A menu of 14 to 15 digital assets ranges from Bleacher Report and CNN.com to authenticated, TV Everywhere apps delivering networks like Discovery and Food Network to subscription streaming outlets HBO Max and Discovery+.

Steinlauf said the landscape has been evolving dramatically, as cord-cutting continues and streaming ambitions have blossomed. “The biggest change that I’ve seen in the last couple of upfronts is that you have these distinct marketplaces,” he said. “There’s a streaming/digital marketplace, which every company that owns linear networks is engaging in, and there’s the linear marketplace. The negotiations are really, here’s what’s happening in linear, here’s what’s happening in streaming. If a content company is willing to do something in streaming, what’s the impact on linear? There’s a lot of horse-trading within these portfolios, both internally and to the outside world. That’s all new because most of these digital and streaming options have come into their own in the past couple of years.”

The process of consolidating all of those outlets for brand messages into one coherent package will run parallel with a streamlining of the merged company’s workforce. Steinlauf was not asked about recent news that voluntary buyouts are getting under way in his U.S. ad sales group, the first step in a goal to reduce the global ranks by up to 30%. WBD leaders have promised to deliver $3 billion in cost savings as a result of the combination but have not indicated how many employees are expected to exit in the process.