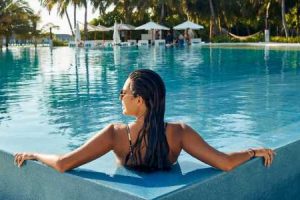 Wealthy millennials are busy booking tickets and packing their bags.

High-income millennials are set to drive the post-pandemic travel boom, according to a new survey from Accenture and TripAdvisor that polled 1,000 Americans. It defined millennial high earners as those raking in at least $100,000 a year. This cohort is most likely to spend big on travel this year, comprising the highest rate of luxury bookings (trips costing at least $5,000) among all other generations surveyed.

Driven by a desire for self-care and relaxation, 37% of high-earning millennials have already booked or are planning to book a luxury trip, and 32% are planning to increase travel spending in 2021, nearly double the average respondent.

In fact, the survey found that high-income millennials are most likely to spend their pandemic savings on travel. It’s an on-brand finding for this demographic of the generation, who prefer to spend on experiences like travel and have saved up to $3,000 a month during lockdown last year.

After a year in lockdown, they’re looking to travel further and stay away longer, according to the survey. “Whether it’s a domestic or international flight, young travelers are going the distance and heading to beaches, cities, and even on cruises,” it reads.

That high-earning millennials are willing to spend on this sector is an optimistic sign for travel’s comeback. While more Americans intend to travel as the weeks go by, it’s still a hole in the economy that needs to be filled.

Luxury travel spending is also a good sign for the economy overall. Economists are predicting that a lockdown lift will see the biggest boomtime in a generation, potentially ushering in a new era in the US economy. Moody’s Analytics expects the US economy to grow 6.4% in 2021 after shrinking 3.5% in 2020.

But the US’ economic fate will depend on whether Americans view their $2.6 trillion in excess savings as wealth or deferred income, BofA’s head of North America Economics, Ethan Harris, wrote in March. Much of that is in the hands of higher-income households, who have more of a propensity to spend.

Consumer spending accounts for 70% of the American economy, and half of that is from the top 10% of American households, per estimates from Goldman Sachs and Deutsche Bank, respectively. That means about one-third of US GDP comes from spending by the top 10%.

It also means that, as UBS strategist Keith Parker wrote in a March note, “higher-income households are key to driving the recovery in consumption.” Those earning over $80,000 annually expect to increase their spending more than low- and middle-income earners, per a follow-up UBS note.

BofA Research has separately found that spending among lower-income households continues to run the strongest as the economy reopens. High-earning millennials shelling out on luxury travel could help turn the tides toward increased spending among the wealthy, which would help get the economy back on its feet.