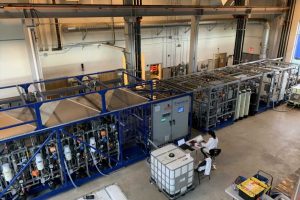 It's a niche investment, but could have critical implications for the rapidly growing electric vehicle market, as its founders aim to improve a very specific part of the lithium supply chain: Turning raw lithium into material for batteries.

Growth in the number and size of batteries for electric vehicles will be responsible for more than 90% of demand for lithium by 2030, according to Andrew Miller, the chief operating officer of Benchmark Mineral Intelligence, a market intelligence company for the lithium ion battery to electric vehicle supply chain. Demand is expected to grow from about 354,000 metric tons of lithium carbonate equivalent in 2020 to 2.57 million metric tons by 2030. (Lithium carbonate equivalent is the metric used to normalize weights of different lithium products produced.)

That demand could be hard to meet because not because the quantity of lithium is limited, but because there are limited resources for turning that lithium into a form that can be used by the battery industry, Miller said.

'The heart of the process'

There are five segments of the lithium market: mining and extraction; chemical processing; battery component part manufacturing; battery assembly; and end-use production, where the batteries are put into cellphones, laptops, electric vehicles and the like.

"We are the heart of the process," Mangrove CEO Saad Dara told CNBC. "We take the crude lithium and we refine it into a battery grade product,"

The first iteration of what would become Mangrove started in 2013 as Dara's graduate project at the University of British Columbia, where he got his PhD in chemical and biological engineering.

In 2017, Dara and his colleagues got money from the Canadian federal government to pursue water desalination and chemical production and turned that technology out into a company, which was first called Mangrove Water Technologies. (It's still pursuing a desalinization project in Western Canada.)

In 2018, a producer of lithium from South America was interested in whether the Mangrove team could process lithium chloride, a specific form of lithium which is pulled out of the ground in mining, into lithium hydroxide. That inquiry spurred the start-up to pursue an electrochemical process that refines lithium in a way that the company claims is more energy-efficient than conventional processes.

"The problem that you have with lithium extraction and processing generally is it's quite inefficient," Ian Hayton, a materials and chemical analyst at the research and consulting company, Cleantech Group. "The current lithium extraction process, you probably only get about 50% of the lithium out of the actual brine or from the hard rock."

Dara also explains that the feedstock, or raw material that is used in the industrial process, stays separate from the product in the chemical processing, which leads to a higher quality product.

"We operate in a way that the lithium hydroxide or carbonate that's being produced is not interacting with other chemicals. It's not coming in contact with other things. And so it's producing the high-quality battery-grade product," he said.

It's a lot of promises, but Breakthrough Energy Ventures stands behind its bet.

"Our investment into Mangrove stems from our analysis in the growth of electric vehicles, a massive increase in demand for lithium and resulting potential supply and costs constraints," Carmichael Roberts, co-lead of the investment committee at Breakthrough Energy Ventures, told CNBC.

"When Mangrove is able to successfully deploy its solution, it will represent a 40% reduction in cost for battery grade lithium hydroxide, and improve the [internal rate of return] for brine production and refining projects enabling them to come online faster and at lower cost," he added. "This will be a really big deal."

Lithium's promise impressed Zheng Chen, a professor at University of California San Diego who works on recycling processes for lithium-ion batteries but has no connection to the company.

"The capability of directly producing high purity lithium carbonate and lithium hydroxide is impressive," Chen said. But he says scaling up could be a challenge.

"It seems they have demonstrated reasonable scale, but can they operate to produce high purity lithium salt at 10,000-ton scale with cost benefit at the same time? If they can, it will be a game changer," Chen said.

Mangrove isn't Breakthrough's only investment in the space. In October, the firm announced an investment in Lilac Solutions, a lithium extraction technology company which increases the production of lithium from brine resources.

Mangrove has seven employees and a pilot plant that is operating in Vancouver, and will use the money from Breakthrough to build a commercial, industrial scale plant. Dara says the company aims to have paying customers by the end of 2022.

The lesser of two evils

Mangrove's value proposition is a poignant reminder that even a laudable goal, like eliminating gas-guzzling vehicles to meet global emissions reductions targets, can have unintended consequences.

That's because lithium mining uses a ton of energy and water, and can ravage the land.

"Probably the lower impact is still achieved if you think about transportation from having [electric vehicles] versus gasoline vehicles, even though there is a negative impact to the lithium mining," Hayton told CNBC. "So then there's the question of trying to minimize the amount of mining that you do. And I think that's important. And then also, minimizing the impact of that mining."

Another potential solution is to increase the recycling of lithium.

"But even if all you did was just recycle materials all day long, we still don't have enough stock of the materials to go into the vehicles that we need. So there has to be mining," Hayton said.

To have the least impact of lithium mining means maximizing the efficiency of the production of lithium, Hayton said.

"Anyone that anyone that improves that yield of lithium, going from 50% to 90% — that's absolutely huge," Hayton said, adding that Mangrove has a bit of an advantage because the company has been around for a while.