Home » Will Derek Chauvin take the stand in his murder trial in George Floyd’s death? Your questions, answered

Will Derek Chauvin take the stand in his murder trial in George Floyd’s death? Your questions, answered 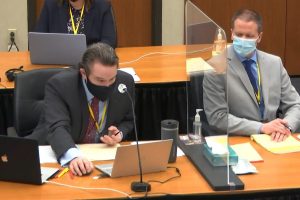 MINNEAPOLIS – Almost a year after the death of George Floyd in police custody, the murder trial of former Minneapolis police officer Derek Chauvin is underway and expected to continue for up to several more weeks.

The trial is being held on the 18th floor of the Hennepin County Government Center downtown. Jury selection in the trial happened last month, when the court selected 14 jurors – 12 to deliberate and two to serve as alternates. The judge has said the trial could last four weeks.

Jurors have heard from dozens of witnesses so far – including Floyd’s girlfriend, bystanders, police officers and paramedics – and are expected to hear from dozens more before the trial is finished. They’ve also seen dozens of video clips from bystanders, business surveillance cameras, city cameras and police body-cams.

Here are the answers to some of your top questions.

Will Derek Chauvin speak at his trial?

Legal observers say they doubt that the defense would call up Chauvin, though it depends on how the case goes.

Whether Chauvin ends up testifying may depend on how his defense attorney, Eric Nelson, handles cross-examination of the medical experts, said Mary Moriarty, former Hennepin County chief public defender.

The medical experts will be key to the case because prosecutors argue Floyd died from Chauvin’s knee on Floyd’s neck, while the defense argues Floyd died as a result of the drugs in his system and underlying medical conditions.

Moriarty said it’s possible he may testify “if he can add something to their case, (like) his perspective on what he did.” His testimony could end up being a last-ditch effort for the defense at the end, or an effort to humanize him, she said.

Joseph Daly, a professor at Mitchell Hamline School of Law, said it would be “extremely risky” for Chauvin to testify. “The main danger of him testifying is the prosecution will put in its entire case again – through its cross of Mr. Chauvin, not to mention his bad behaviors in other situations,” Daly said.

There have been 17 complaints filed with Minneapolis police about Chauvin. Prosecutors wanted to be able to tell jurors about eight of the incidents, but the judge allowed only two of them to be admitted as evidence. (It’s common for judges to make such rulings on what evidence can be introduced in a trial.)

“It is ultimately the client’s decision,” Sampsell-Jones said. “Nelson will advise Chauvin on what the best course will be, but it’s ultimately Chauvin’s decision. No one knows what’s in his head.”

Sampsell-Jones said “some clients really want to tell their story, some are afraid to testify, and some just do what they’re lawyer advises.” He said it’s impossible to tell what category Chauvin is in.

Is Derek Chauvin in jail?

Throughout the trial, Chauvin has been sitting in the courtroom next to Nelson, his attorney, wearing a face mask and appearing to take notes on a yellow legal pad.

He was also present in the courtroom during the 11 days of jury selection last month.

Chauvin was fired last year from the Minneapolis Police Department, a day after Floyd’s death, and was arrested a couple days later.

What are the charges?

Three other former officers involved are charged with aiding and abetting those crimes. They will stand trial in August.

Emotional eyewitness accounts, lots of video: What we learned in the first week of testimony at Derek Chauvin trial