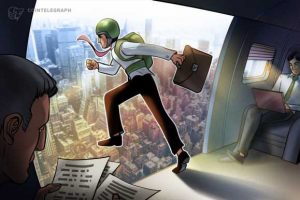 Weeks after the AAX exchange started halting its withdrawals, its vice president for global marketing and communications announced that he has resigned from his role at the cryptocurrency exchange.

In a Twitter thread, Ben Caselin confirmed that he has left the firm and highlighted reasons as to why he decided to leave his post at the crypto exchange. According to Caselin, despite his efforts in fighting for the community, the initiatives that they came up with were not accepted. The executive described that his role in communications became “hollow.”

The former AAX executive also expressed his disagreement with the way that AAX is handling the issue. Caselin described the actions of the exchange as “without empathy” and “overly opaque.”

In the midst of the withdrawal halt, the former executive also highlighted that many people, including some of his family members, have asked him for help. However, Caselin wrote that there was nothing he could do at the moment and that everyone is waiting for actions from the exchange.

Despite the current situation, the former AAX executive believes that things will be handled without evil intentions, but noted that the damage is already done. “The brand is no more and trust is broken,” he wrote.

Related: Here’s how centralized exchanges aim to win back users after the FTX collapse

On Nov. 14, the AAX exchange started the halt for withdrawals citing a need to fix a glitch on its system upgrade. The exchange assured its community that the halt in withdrawals had nothing to the with the ongoing FTX collapse and said that they have no financial exposure to the embattled FTX exchange.

After the announcement, the AAX team highlighted that it needs additional capital because its investors have decided to withdraw their funds from AAX because of the FTX collapse. The exchange explained that this puts them at risk of a capital deficit, which they have to fix before resuming normal operations.

Cointelegraph reached out to AAX’s public relations team but has not received a response yet.