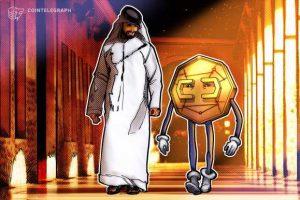 An official announcement from the United Arab Emirates capital’s financial center confirmed that Binance will be cleared to offer cryptocurrency custodial services to professional clients once it has met the requirements for its Financial Services Permission.

The news came after Binance founder and CEO Changpeng Zhao attended the Abu Dhabi Finance Week. Zhao appeared onstage alongside Galaxy Digital CEO and investor Mike Novogratz at the event for a wide-ranging conversation that touched on the aftermath of the ongoing FTX bankruptcy.

Binance had already gained a foothold in Abu Dhabi after being granted in-principle approval from ADGM in April 2022. This gave the exchange the go-ahead to operate as a broker-dealer for cryptocurrencies and digital assets.

While Binance looks set to begin offering its exchange services to customers in Abu Dhabi, the announcement had its detractors. Chief among those was economist and cryptocurrency critic Nouriel Roubini, who made disparaging remarks about the regulatory clearance afforded to Binance during a separate panel at the Abu Dhabi Finance Week.

Roubini argued that Binance being banned in the United Kingdom and ongoing investigations by the United States Department of Justice suggests the exchange is a “walking timebomb”:

“Unfortunately, this is an ecosystem that is totally corrupt. I think this is a lesson from the last few weeks, and I think these people should be out of here. I can’t believe [Zhao] and Binance has a license to operate in the UAE.”

Binance has had an intriguing role to play amid the implosion of Sam Bankman-Fried’s FTX empire. Zhao held initial talks with his competitor to bail out FTX, but closer scrutiny of the company’s financials saw the deal fall through before FTX filed for bankruptcy.

Binance then led a movement followed by a number of prominent exchanges to provide proof-of-reserves of cryptocurrency asset holdings. The exchange has also set up an industry recovery fund aimed at providing financial support to exchanges and projects facing liquidity issues.

Binance has received a number of regulatory approvals in different countries in 2022, with Dubai giving the all-clear in September 2022. This followed the exchange receiving regulatory clearance to offer its services in Bahrain in March 2022.