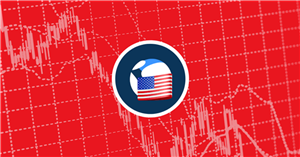 The UST dollar peg touched a low of $0.6 on May 10th. Shortly after the Luna Foundation Guards (LFG) finished building their $3 billion treasures last week, the stablecoin was challenged due to low liquidity.

The de-pegging of the UST Dollar began with large withdrawals from Anchor’s pool 53, and the UST Dollar fell from $1 to $0.98 as a result. Anchor is Terra’s largest yield-earning protocol, and it is responsible for steering the most demand to UST. The de-pegging cost UST’s greatest profitability source (Anchor) 60% of its deposits in just a few days.

Traders sold bitcoin in response, and there was widespread speculation that LFG might liquidate its BTC reserves to maintain the peg. LFG outlined a proactive strategy to address the situation on May 9th, which included decentralizing its reserve strategy.

The interruption subsided shortly after the announcement, but UST was unable to maintain its $1 peg indefinitely. It dropped to $0.9 and increased pull-outs, resulting in a $0.6 drop. Even if the LFG is successful in restoring the peg, much damage has already been done.

Despite recent efforts to keep it that way, the UST stable coin continues to drift away from being a decentralized stable coin. LUNA’s price has dropped sharply (below $1) and has been temporarily suspended due to network congestion caused by UST withdrawals. While UST resumed its downward trend, LUNA’s value plummeted by 96% in just 24 hours.

Meanwhile, it appears that BTC reserves may not be adequate to sustain the peg with confidence.

With LFG’s involvement, UST may recover, but the long-term impacts on its reputation and the trust it has progressively gained from investors may take longer to recover. The current situation of the UST serves as a reminder that stronger frameworks for including structural risks for similar algorithmic stable currencies should be developed.