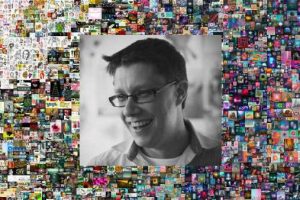 In a record-breaking NFT sale of a digital artwork NFT, Mike Winkelmann’s (Beeple) latest piece “Everydays – The First 5000 Days” goes for a whopping $69 million. The auction was conducted by the 250-year-old auction house Christie’s on the Makersplace NFT platform.

This is probably the costliest NFT for a digital artwork ever sold! The recent sale put Beeple among the “top three most valuable living artists,” as per Christie’s.

Initially, there were reports about Tron’s Justin Sun winning the $60.25 million bid. But as reported by Bloomberg, a Tron representative confirmed at the last moment sun was outbid by someone else. In an email to the publication, Roy Liu, head of business and corporate development at Tron said:

“NFT is definitely a revolution for our generation. Both Justin and Tron Foundation are super excited for the technology and will heavily support the ecosystem development around that”.

Beeple’s Artwork and His Journey With NFTs

Bepple’s “Everydays – The First 5000 Days” digital artwork is basically a collage of all images he’s created since 2013. The artwork has been connected to an NFT, a special type of cryptographic token working on the blockchain.

The growth of the non-fungible tokens (NFTs) market has really changed fortunes for Beeple over the last few months. Until last October, Beeple was selling his digital art pieces for something around just $100. Now, the artist is playing in multiple millions.

The latest record-smashing sale of $69 million after successfully conducting other NFT sales in the months before. Last October 2020, Beeple entered the NFTs market and since then there’s no looking back. He sold his first series of NFTs for $66,666.66 each. In December 2020, he sold another series for a total of $3.5 million.

Noah Davis, a specialist at Christie’s who organized the sale told Bloomberg:

“The first day of bidding was one of the most magical events in my auction career. I’ve never seen anything like it”. In the first eight minutes of bidding, about 20 bidders pushed the work to US$1 million. “Only three [of the bidders] were known to us previously.”

However, the last minutes of the sale were wilder and escalated the sale price in no time. An hour before the ids were around $14 million while the final hour pushed the price 5x. Interestingly, Christie’s is also moving closer to the crypto world and will is accepting Ethereum (ETH) in the payments form. Alex Rotter, Christie’s chairman of 20th and 21st century art, said:

“We let the market decide what it’s worth, we didn’t push anyone to bid US$60.25 million. People want Beeple, and the market decided. Sixty-nine million dollars in the context of the traditional art market, would be the top piece in most auctions—the top artwork in any sale.”