Home » Billionaire Carl Icahn Mulls Over Diving Into Cryptocurrency in a 'Big Way' With About $1.5 Billion Investment – News Bitcoin News

Billionaire Carl Icahn Mulls Over Diving Into Cryptocurrency in a 'Big Way' With About $1.5 Billion Investment – News Bitcoin News 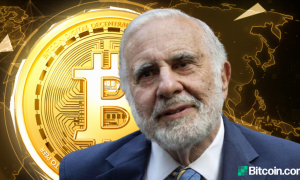 Billionaire investor Carl Icahn, the founder of Icahn Enterprises, says that his company is exploring how to get involved in cryptocurrency “in a relatively big way,” which he said could be an investment of about $1.5 billion.

Carl Icahn Exploring Getting Into Cryptocurrency

Carl Icahn, the founder and controlling shareholder of Icahn Enterprises, a diversified conglomerate holding company based in New York City, revealed his cryptocurrency plan in an interview with Bloomberg on Wednesday. He said:

I’m looking at the whole business and how I can get involved in it with Icahn Enterprises in a relatively big way because, I think, it’s here to stay in one form or another.

The billionaire investor was asked specifically what a “relatively big way” means for him and his company. He described:

A big way for us would be a billion dollars, a billion and a half dollars, something like that. That would be sort of a big way, I guess, for us. But sometimes we go bigger than that, sometimes a lot smaller. Im not going to say exactly.

Icahn further clarified: “To be clear, we have never bought any cryptocurrency, but we are studying it.”