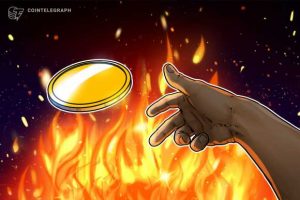 Cryptocurrency exchange Binance has announced it completed the first burn of Terra Classic tokens’ trading fees in response to a community proposal from September.

The exchange’s original announcement from Sept. 26 said the burns would be completed every Monday — making the next event on Oct. 10 — sending trading fees to a LUNC burn address. Many in the Terra community proposed the burn strategy as part of efforts to revive LUNC, whose price dropped to almost zero in May and briefly surging by more than 250% in September.

Related: Do Kwon shares LUNA burn address but warns ‘LUNAtics’ against using it

Terraform Labs co-founder Do Kwon, whom many in the crypto space want held to account for his role in Terra’s collapse, has been targeted by South Korean authorities for allegedly violating the country’s capital markets laws. A warrant has been issued for his arrest and Interpol added Kwon’s name to its Red Notice list, requesting local law enforcement — many have suggested he may be in Singapore — detain the Terra co-founder. At the time of publication, Kwon’s whereabouts are unknown, but he said on Twitter on Sept. 26 he was “making zero effort to hide.”