Binance will delist LUNA/USDT contracts as price falls below 0.005 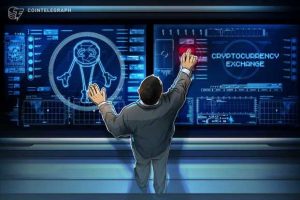 Major crypto exchange Binance announced it will be delisting its Tether (USDT)-margined Terra (LUNA) futures contracts following a more than 99% drop in price.

In a Thursday blog post, Binance said it would be taking “precautionary measures” around its LUNA/USDT perpetual contracts, intending to delist the pair if the price goes under 0.005 USDT. The announcement followed the exchange changing the leverage and margin tiers for the LUNA-tied contracts on Wednesday, with the maximum leverage set at eight times for positions under 50,000.

In addition, Binance said it would be launching Binance USD (BUSD)-margined LUNA futures contracts on Thursday, seemingly as an alternative investment vehicle should it delist LUNA/USDT. According to the exchange, it has experienced “slowness and congestion” causing a large number of Terra network withdrawal transactions to be marked as pending.

The LUNA price has fallen more than 99% in the last 24 hours, reaching $0.004 at the time of publication following a mass sell-off. The volatility has affected many tokens across the crypto market, with Bitcoin (BTC) dropping under $27,000 to a 16-month low and Ether (ETH) under $2,000 for the first time since July 2021.

Amid extreme market volatility, many exchanges have addressed FUD rumors circulating on social media regarding user funds. Celsius Network CEO Alex Mashinsky told his Twitter followers on Wednesday that the platform “has not experienced any significant losses and all funds are safe.” Coinbase CEO Brian Armstrong similarly told exchange users that the company has “no risk of bankruptcy.”

Related: Untethered: Here’s everything you need to know about TerraUSD, Tether and other stablecoins

On Tuesday, Terra co-founder Do Kwon hinted at a “recovery plan” for TerraUSD (UST), later adding he supported community proposals to increase the algorithmic stablecoin’s minting capacity. However, Kwon has not posted any updates following the additional price drop of LUNA.