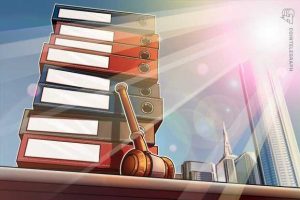 Just two weeks after appearing in an ask me anything (AMA) with Celsius founder Alex Mashinsky, crypto Youtuber Ben Armstrong has announced he intends to file a class action lawsuit against the lending platform and its chief executive.

Armstrong made legal threats via Twitter on June 15, and has since provided more detail in multiple threads. His issue is centered on being unable to pay down loans with existing funds on the platform, and instead having to deposit new funds to pay the loans off:

“Imagine an insolvent company that you can’t withdraw your money from ASKING YOU TO SEND THEM MORE MONEY,” he added.

Armstrong stated that he is currently working through the process of getting all “disclosures, documents, loan details, etc” put together while speaking to attorneys to explore the best ways to go about the class action. Co-plaintiffs are yet to be added as Armstrong hasn’t “officially began moving” yet.

BitBoy Crypto is the second most subscribed crypto YouTube account with roughly 1.45 million subscribers and primarily provides commentary on market news/events. The channel is only behind Coin Bureau and its 2.07 million subscribers, although BitBoy Crypto has plenty of detractors too, some of whom allege that he has been paid to promote dubious crypto assets in the past.

Armstrong’s sentiments towards Celsius have swung wildly from just two weeks ago, when he was featured on the  ask me anything (AMA) session with Mashinsky on Celsius’ YouTube channel.

“And today I’m the victim. Kicking myself for wondering how I let this get so bad and so far,” he said.

Celsius is battling either insolvency or it’s experiencing severe liquidity troubles as a result of the crypto market plunge. The firm paused withdrawals on June 13, and also reportedly shifted around $320 million worth of assets to pay down loans and avoid liquidation on decentralized finance (DeFi) platforms such as AAVE.

One issue to a potential lawsuit however, is if Celsius files for bankruptcy it will trigger a provision called “automatic stay”, which would prevent creditors from pursuing collection activity against the firm.

Celsius has reportedly onboarded restructuring lawyers from Akin Gump Strauss Hauer & Feld to find potential solutions for its financial troubles, however Armstrong claims that these types of lawyers “specialize in MOSTLY preparing companies for bankruptcy.”

“Even if Celsius does file bankruptcy, we have discovered some potential workarounds to still do a class action lawsuit (not effected by bankruptcy). Unfortunately I have to keep that one close to the vest for now,” he said.

Related: DeFi contagion fears and rumors of Celsius and 3AC insolvency could weigh on NEXO price

In terms of recouping funds from Celsius, there does at least appear to be a potential option for users with less than $25,000 on the platform to obtain their assets in the immediate future. Joshua Browder, the founder of robot lawyer DoNotPay tweeted a step-by-step strategy on June 15 on how users might be able to get funds back:

“As of right now, these exchanges have not yet filed for bankruptcy protection. Therefore, they are subject to small claims court judgements. Small claims court cases typically take 1-2 months. As long as this drags on longer than that, this strategy will work.”