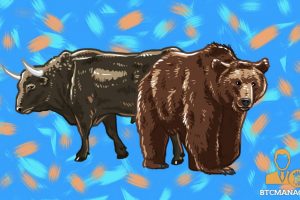 Total crypto market cap added $200 billion to its value for the period since Monday and now stands at $2.31 trillion. The top ten coins are all in green for the last 24 hours with Polkadot (DOT) and Cardano (ADA) leading the pack with 13.2 and 8.7 percent of increase respectively. At the time of writing bitcoin (BTC) is trading at $54,150. Ether (ETH) is at $3,561.

The bitcoin bulls successfully defended the horizontal support near $40,500 last week which resulted in the full capitulation of sellers by Sunday. The leading cryptocurrency ended September with a 7 percent loss but initiated a fresh new uptrend rally in the first days of the new month.

On Sunday, October 3 the coin reached the important $48,000 mark. This level served as a short-term resistance during the trend reversal attempt in mid-September and was now about to test the price momentum.

Bitcoin was 11.8 percent up on a weekly basis. The weekly timeframe chart was looking good for the long-term BTC holders as it was suggesting the recent pullback is rather a temporary retracement than a beginning of a new bear market.

The new seven-day period started with a short green candle to $49,100 as buyers surpassed the Volume Profile Point of Control and BTC was now heading towards the psychological level of $50,000.

On Tuesday, two important short-term milestones were achieved. First, the mentioned critical horizontal level was broken, and second, bitcoin climbed above the three-point strong weekly downtrend line for the first time since mid-April suggesting a general reversal in the market direction might be upon us. It closed the session at $51,400 with a 4.7 percent of increase.

The mid-week trading on Wednesday, October 6 was no different as the cryptocurrency market was surging. Bitcoin was once again leading the group with more than 7 percent being added to its valuation and $55,000 was the next point of interest for bulls.

What we are seeing midday on Thursday is a price correction as profits start to flow from BTC to the lagging altcoins.

The Ethereum Project token ETH bottomed slightly below the $3,000 demand zone (at $2,760 to be more precise) and started moving in the opposite direction. The coin broke above the short-term downtrend on October 1 and by Sunday, October 3 reached the upper end of the old range. It ended the week at $3,419 with an 11.6 percent of price increase for the period.

The cryptocurrency market managed to quickly absorb the latest FUD coming from China and chose to follow the US regulators and financial authorities as both the Federal Reserve and the Security and Exchange Commissions confirmed there are no plans to ban any digital assets which are compliant with the laws.

On Monday, the ether consolidated in the above-mentioned area after successfully testing the previous resistance level now turned support.

The trading session on Tuesday, October 5 was once again good for bulls as the ETH/USDT pair was closely following bitcoin’s trajectory. It moved up to $3,515.