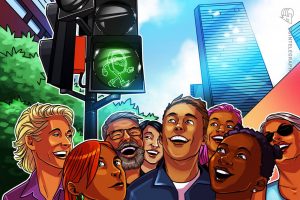 German financial regulators have approved a security token offering (STO) based on a Bitcoin (BTC) sidechain.

German investors can invest in EXOeu via Stokr with a minimum investment amount of $100. EXOeu is the second STO ever approved for the German market on Stokr after BaFin approved an STO by parking network ParkinGO last year.

Launched in January 2021, the EXOeu security token is raising funds for the development of Samson Mow’s sci-fi MMO game Infinite Fleet. The offering has been available for investors in other European countries lik France, Luxembourg, Spain, Portugal, raising more than $7 million to date.

While many STOs are based on the Ethereum blockchain, the EXOeu token is issued via Blockstream Amp, a platform for tokenizing securities built on the Liquid sidechain of Bitcoin.

“Bitcoin is shaping payments, and it’s about time it shaped capital markets — this can be done via layer two technologies,” Stokr co-founder Arnab Naskar said, adding that Ethereum is “losing its charm” as an STO platform due to high gas fees and the uncertainty around Ethereum 2.0.

According to Stokr co-founder Tobias Seidl, BaFin’s approval of Exordium’s STO marks a new milestone in cross-border blockchain-based STOs. “We see Bitcoin as a fundamental backbone of the future capital markets, which will be built on blockchains,” he said.

The news comes shortly after major crypto exchange Bitfinex announced last week that it would debut its own STO trading platform with Exordium (EXO) trading.