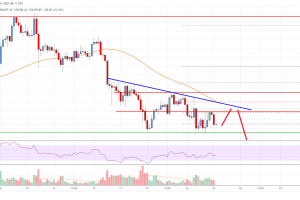 Bitcoin price is gaining pace below $58,500 against the US Dollar. BTC might decline heavily if there is a clear break below the $55,500 support zone.

Bitcoin price failed to start a steady increase above the $60,000 resistance zone. As a result, there was a fresh bearish reaction and BTC declined below the $58,500 support zone.

A close above the $58,500 zone is needed for a fresh increase. In the stated case, the price is likely to rise steadily towards the $60,000 level.

Looking at the chart, bitcoin price is clearly trading below $58,000 and the 55 simple moving average (4-hours). Overall, the price could accelerate lower if there is a break below the $55,500 support zone.

4 hours MACD – The MACD is now gaining momentum in the bearish zone.

4 hours RSI (Relative Strength Index) – The RSI is well below the 50 level.