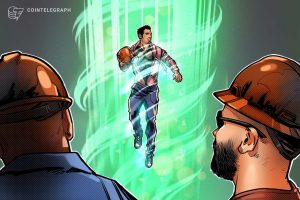 Canadian Bitcoin mining company Bitfarms is planning to build its first data center in the United States following the purchase of a land plot in Washington State.

In a Nov. 11 announcement, Bitfarms said it aimed to establish mining operations in the U.S. capable of 620 petahashes per second using 6,200 Bitmain rigs fully powered by hydroelectric energy. The firm has already purchased a 24 megawatt hydro power farm in Washington for $26 million, but plans to expand to 99 MW by developing additional farms in the area.

Bitfarms CEO Emiliano Grodzki said the firm had chosen Washington for its “cost-effective electricity” and production rates. With the addition of the 24 MW data center, the company currently has a total mining capacity of 106 MW, but estimates the completed facilities will be able to produce 3.7 Bitcoin (BTC) daily at a cost of roughly $4,000 per BTC — at the current BTC price of $65,000, this would mean roughly $183,000 in profit daily.

At a time when many are citing the potential environmental impact of crypto mining, Bitfarms claims its facilities in Canada are powered almost entirely by hydroelectric energy. Cointelegraph previously reported that Bitfarms had doubled its monthly crypto mining productivity between January and July, mining 199 BTC and 400 BTC, respectively, potentially as a result of the crackdown on miners in China.

According to the mining firm, it currently has 10 farms in operation or under development in countries including the United States, Argentina, and Canada. At the time of publication, Bitfarms claims a mining capacity of 82 MW at 1.8 exahashes per second.