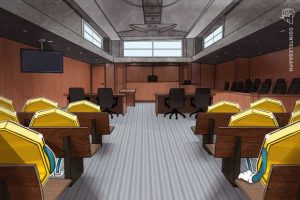 The CEO of fintech firm Block Earner has lashed out over the “lack of clarity” in Australia’s financial licensing regime after his company was sued by the country’s financial services regulator for providing unlicensed crypto-based investment products.

The Australian Securities and Investment Commission (ASIC) announced on Nov. 23 local time that it started civil legal proceedings against the company because it offered three crypto-linked fixed-yield earning products without an Australian Financial Services (AFS) license.

ASIC stated that the products should have been licensed as they were “managed investment schemes” where investors contribute money that is pooled together for an interest in the scheme.

The products, named “Crypto Earner”, “USD Earner” and “Gold Earner,” offered yields through users depositing Australian dollars that would be converted to Bitcoin (BTC), Ether (ETH), USD Coin (USDC) or PAX Gold (PAXG) depending on the product according to Block Earner’s website.

The crypto-assets are then lent to borrowers on Decentralized Finance (DeFi) protocols Aave (AAVE) and Compound Finance (COMP) to generate yield for the product.

ASIC Deputy Chair Sarah Court aired her concern that Block Earner offered the products without “appropriate registration” or an AFS license that she claimed left “consumers without important protections,” adding:

“Simply because a product hinges on a crypto-asset, does not mean it falls outside financial services law.”

In an emailed statement to Cointelegraph Block Earner CEO and co-founder, Charlie Karaboga, said although the firm “[understands] the backdrop” it was a “disappointing outcome.”

He said it welcomes regulations, claiming the firm “spent considerable resources building regulatory infrastructure” to be able to offer services “under existing guidelines provided by ASIC.”

Karaboga took aim at the unclear regulatory environment for crypto in the country and said the “lack of clarity […] creates friction between regulators and innovators,” adding:

“In an ideal world, we would build these products in a regulatory sandbox with more clarity around licensing regimes. In the future, we look forward to working with ASIC and other regulators in this space.”

According to Karaboga, Block Earner had filed for a credit license and advised ASIC it would apply for an AFS license for its upcoming products as “the licensing requirements are clear.”

ASIC has previously given a warning to crypto-asset providers in the country after it took action against the creators of the Qoin token.

It said its “key priority” is targeting “unlicensed conduct and misleading promotion of crypto-asset financial products” after it alleged the Qoin token creators were “misleading” its users.