Most cryptocurrencies kicked off the week on an uneventful note albeit rallying for the whole of last week amidst mixed reactions towards geopolitical and international economic developments.

As of writing, Bitcoin is trading at $41,054, down 0.19% on the day, albeit being up 5.90% in the past seven days with traders highlighting $40,000 as a key support zone. On the upper side, $45,000 remains to be one of the most closely watched resistance areas with traders predicting that a breach of that area could spur a strong push to the upside.

On the other side, in somewhat of a Monday effect, Ethereum seems to have already picked up last week’s pace with the cryptocurrency starting to print a bullish daily candle. Currently, the coin is trading at $2,914 and has gained roughly 14.71% in the last seven days with pundits pointing at the $3,060 level as the biggest hurdle to price making a date with higher prices.

That said, the strength exhibited by cryptocurrencies in the past two or so weeks despite surging U.S. inflation figures and the ongoing Russia-Ukraine conflict has been a great sign for what is to come.

According to pseudonymous Twitter user, Rekt Capital, the last weekly candle close by Bitcoin could be a strong indicator of incoming strength. 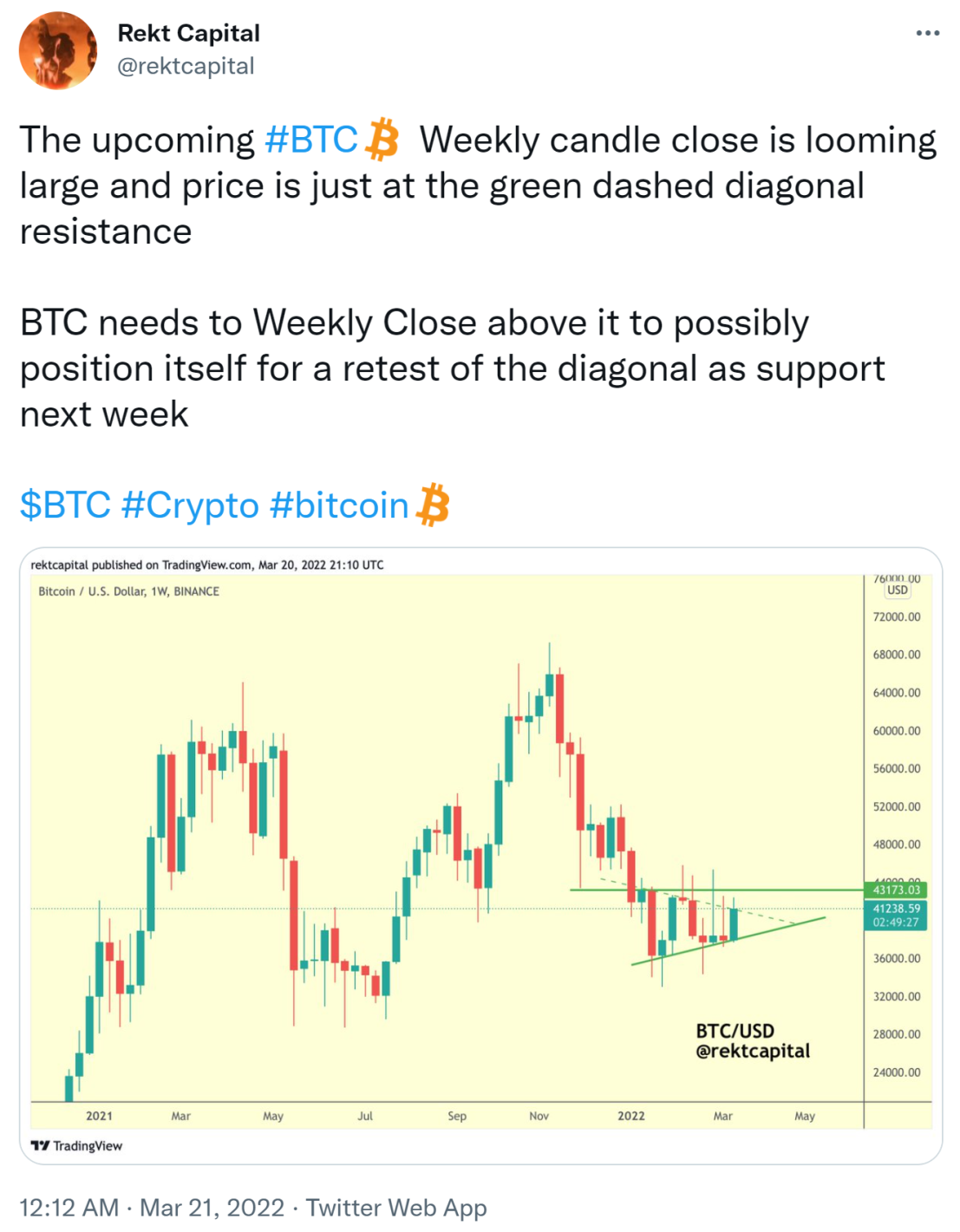 Despite Bitcoin losing momentum since November 2021 with price being thrown into a tight squeeze of between $33,000 and $44,000, on-chain data has also been painting a completely different picture.

On-chain analytics firm sentiment has indicated that the ratio of Bitcoin supply sitting on exchanges has continued to plummet.

“Bitcoin’s ratio of supply sitting on exchanges continues dropping hard, down to its lowest level since December 2018.” The firm has said. “There is 13.5% less $BTC on these exchange wallets compared to just 2 months ago, amounting to 1.6% less of the overall supply.”

There has also been a sharp rise in social discussion rates, which points to growing interest in cryptocurrencies globally. That said, with Bitcoin undoubtedly being the most closely watched coin, a bullish move this week could stir equal or larger moves by altcoins.