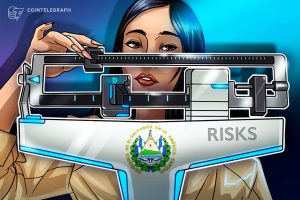 El Salvador’s historic embrace of Bitcoin (BTC) could have negative consequences on the country’s sovereign credit outlook, according to Moody’s Investors Service.

Moody’s analyst Jaime Reusche told Bloomberg this week that El Salvador’s Bitcoin gambit “certainly adds to the risk portfolio” of a country that has struggled with liquidity issues in the past.

Under the leadership of President Nayib Bukele, El Salvador has recognized Bitcoin as legal tender and issued a state-run crypto wallet to facilitate payments, transfers and ownership. Along the way, El Salvador has amassed a treasure chest of 1,391 BTC, with President Bukele famously “buying the dip” on several occasions by using Bitcoin’s volatility to add to his country’s holdings.

However, Reusche warned that accumulating more BTC would elevate El Salvador’s risk of default. “If it gets much higher, then that represents an even greater risk to repayment capacity and the fiscal profile of the issuer,” he said.

In addition to downgrading El Salvador’s credit rating, Moody’s has warned that the country’s so-called Bitcoin volcano bond could limit its access to foreign bond markets. Proceeds of the volcano bond, which is expected to raise roughly $1 billion, will be used to fund El Salvador’s Bitcoin City project.

Attacks on El Salvador’s Bitcoin gambit by legacy financial institutions are nothing new. In November 2021, the Washington-based International Monetary Fund warned El Salvador against using Bitcoin as legal tender. Meanwhile, the World Bank has rejected the country’s request for assistance in implementing its Bitcoin Law over the cryptocurrency’s alleged environmental and transparency issues.