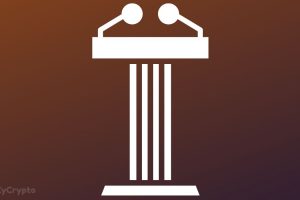 Cardano’s co-founder Charles Hoskinson has challenged Dominik Schiener, IOTA co-founder and chairman of the IOTA Foundation, to a debate.

Hoskinson was reacting to a tweet by the Reddit community of IOTA requesting the two co-founders to discuss aspects of the two projects, including their status quo, achievements, milestones, technology, pros, cons, market focus, and coexistence.

In response, Schiener has said he is down for the chat. He also volunteered to bring on Hans Moog – an IOTA foundation and tech enthusiast member – to talk about IOTA’s new protocol. However, no details of when and where the debate will hold have been shared.

According to the Reddit post, the founders have known each other for a while, and the two networks have recorded recent network upgrades. Cardano completed its Vasil upgrade last month, introducing several scalability features and smart contract capability upgrades to the network.

Similarly, IOTA Foundation launched its Shimmer Network, an important part of its roadmap, last month. The upgrade is billed to provide numerous features to tokenize anything from real-world assets to fan tokens natively on the feeless layer 1 blockchain when running at full capacity.

What are community members to expect from the debate?

The tone of communication between the two founders has mostly been cordial and based on mutual respect in the past. Although, there have also been heated moments between the vibrant communities.

Back in 2021, the two founders considered the possibility of connecting the two blockchains through a cross-bridge protocol. Hoskinson requested that Schiener reach out to him. In response, Schiener said he would send an email. However, no further announcements have been made on the proposal since then.

Some arguments erupted between Cardano and IOTA community members after Hoskinson criticized IOTA, saying its feeless transaction model was a “common misconception” during an online AMA session.

In response, an IOTA community member pointed out that the network is feeless to users. The IOG boss insisted that it is impossible to say IOTA is fee-less as transactions on the network bear costs that must be paid by someone along the value chain even though they are somehow subsidized.

The exchange is not the only time Hoskinson has pointed out perceived flaws in other blockchain networks. Recently, he got into a war of words with the Ethereum community and developers, describing the merge as a flawed proof-of-stake implementation.