China Surprises with Rate Cut, “Are Banks Under Stress?” 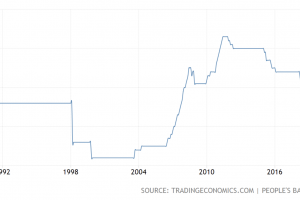 China has taken analysts off guard with a 50 basis point reduction in the reserve requirement ratio (RRR) that applies to all banks except for those that are exempt with a 5% rate.

While the market was expecting a slow exit from the broad monetary loosening, China has decided to free up about one trillion yuan by lowering reserve requirements from 9.4% to 8.9%.

This is the 11th cut since 2018, with China going from having reserve requirements of above 21% just over two years ago, to now less than 9%.

China’s central bank said the cut was aimed at increasing banks’ capital and liquidity as well as lower their cost of lending.

“This gives me a sense of unease. Are banks under stress? If this is the case, it implies there could be more bad loans,” says Iris Pang, the Chief Economist at ING for Greater China.

“These bad loans could stem from the recent deleveraging reform,” she says. “Banks have not be able to lend to real estate developers as easily as before and have shrunk their mortgage business.

Banks cannot change the lending framework for real estate developers. This means banks will continue to suffer from the same issues. And while they have some breathing room for now, this may only last for another quarter or so given that the release of liquidity is quite small compared to loans outstanding. China may need another RRR cut in the fourth quarter.”

China has more room for maneuver but this latest loosening of lending might suggest there’s some cracks in the financial system.

“The government announced its takeover of Baoshang Bank on Friday. It was the first rescue of this kind that the government has launched since 1998, and comes amid mounting concern over rising corporate defaults, mounting debt and a slowing economy.”

That’s Reuters reporting in 2019. A year later in late November 2020 we have a string of defaults by state companies with CNBC stating at the time:

Other high-profile debt defaults followed suit this week, including government-backed chipmaker Tsinghua Unigroup, which missed payment after failing to extend its deadline for repayment, and another default by state-owned Huachen Automotive Group — a Chinese joint venture partner of BMW. Last month, one of China’s largest property developers China Evergrande also came under the spotlight for reportedly having cash crunch issues.”

Now just last week FT reports these troubles continue and citing the S&P rating agency, indicates they may even be growing:

“Rising investor concerns over shaky finances in China’s most economically fragile provinces have prompted a sell-off in state-run groups’ bonds, as analysts warn of a surge in defaults in the country’s $17tn credit market…

Analysts said that while there have been fewer Chinese corporate defaults this year, the scale of missed payments has grown.

In the first six months of 2021, 11 issuers with Rmb95bn of bonds defaulted, compared with 17 issuers of Rmb92bn in the first half of 2020, S&P said. Each defaulter this year had on average three times the value of bonds outstanding compared with 2017, and nine-times that of 2015.

S&P analysts said that ‘defaults are increasingly higher-profile, with bigger impact on markets and investors’.”

Markets have broadly risen today including bitcoin, gold, stocks, oil, presumably because of this move by China’s central bank.

But it’s not clear whether they can contain the fallout of a decades long debt fueled bull run that may have well reached a plateau.

That can potentially explain the recent uncharacteristic behavior of Chinese authorities in continuing to take hostile actions towards bitcoin weeks on after taking a fairly big step in kicking out crypto miners.

In a more financially comfortable situation, you would expect some relaxing after taking such action, but authorities there may be worried more than usual.

However the digital money has little to do with corporate defaults and the race to the monetary bottom that seems to be unfolding there.

In addition if the monetary debt situation gives even the tiniest indication of going south in China, economic actors would probably ask for forgiveness rather than permission in heading for the exit considering this would be the mother of all crashes.

We’re not there yet however, but there appears to be trouble in paradise, and so the question of our time: Are Banks Under Stress?