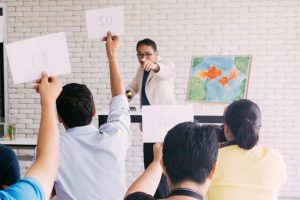 Just the other day, Live Bitcoin News reported on an auction that was taking place for an original copy of the U.S. Constitution. It was supposed to be only one of 13 copies of the original 500 that ultimately survived history and lasted the 230+ years that have gone by since it was first written.

The Constitution Wasn’t Won with Crypto…

A group of avid crypto fans – known as Constitution DAO – began collecting crypto funds from people everywhere through social media and related platforms so that they could bid on the item. They ultimately collected more than $30 million, which seemed to put them in a good position. The idea was that they could bid on this item and win – and prevent someone from owning it and potentially doing it harm just because they had a lot of money to their name.

Sadly, things didn’t quite turn out well for the group. At the time of writing, a winning bid of more than $40 million has been cast. This figure outdoes the one set by Constitution DAO, which means despite their intentions and noble efforts, the group has come up short.

To be fair, the U.S. Constitution up for auction sold at more than double its initial asking price. It has broken the record as the world’s most expensive document, and while the name of the person who won the bid will not be revealed by Sotheby’s (the company that hosted the event), it has been said that the winning bid was around $41 million, and this doesn’t include fees.

Constitution DAO initially sought to raise approximately $43 million. Had this number been reached, there is a good chance the organization would have won the item. Unfortunately, it came up short by roughly $10 million. The group has announced on Twitter that its efforts have not worked and that it would be refunding all the digital cash it garnered from the roughly 17,437 donors that took part in its funding efforts.

The group had stated that the intention was to put the document on display. Members assured donors that they would not be altering the Constitution at all, and that their primary goal was to keep it protected and preserved as it was.

The Importance of the Document Lives On

In an ironic twist, this document was one of 13 copies to survive all these years. How interesting that when the Constitution was written in the year 1787, there were only 13 colonies (later states) in existence in America (cue “Twilight Zone” music here).

The Constitution is arguably one of the most important pieces of legislation to ever exist. Composed more than two centuries ago, the work has drafted the building of a nation, and the laws and rules it presents are still followed today and continue to shape America’s future.