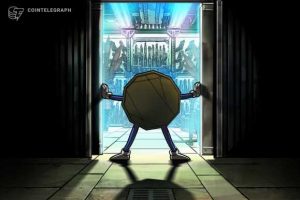 Ukrainian officials have used funds from the crypto donation platform launched by the government to purchase supplies for the country’s military amid its ongoing war with Russia.

In a Friday tweet, Ukraine’s minister of digital transformation, Mykhailo Fedorov, announced that the country had purchased five all-terrain vehicles, which “will come in handy for a challenging environment” — possibly referring to conditions near the front lines with Russia or where roads have been damaged or destroyed. Funds for three of the ATVs originated from Aid for Ukraine, a platform the government launched in March that accepts crypto donations “to support people in their fight for freedom.”

At the time of publication, Aid for Ukraine has reportedly raised more than $60 million in Bitcoin (BTC), Ether (ETH), Tether (USDT), Polkadot’s DOT, Solana’s SOL and USD Coin (USDC). Fedorov reported on Wednesday that the government had already used some of the funds to supply 5,000 gas masks to state border guards and the army. Aid for Ukraine has also purchased more than 5,000 “optical and thermal imaging devices” for the nation’s military since the war began; tablets aimed at helping Ukrainians escaping the country find accommodations and aid; bulletproof vests; medical supplies; vehicles; and clothing

Related: The Ukraine invasion shows why we need crypto regulation

Since the beginning of the Russian military invasion in February, the Ukrainian government has turned to the crypto space many times as a solution for receiving funds from concerned parties. Fedorov announced in April that the government would accept contributions toward the war effort in the form of nonfungible tokens, or NFTs, which will in turn be sold to “contribute to the Ukrainian victory,” and it recently launched a charity NFT collection with pieces from Ukraine’s video game developers and digital artists.