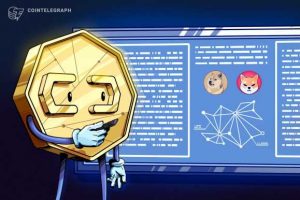 Having emerged with the self-applied moniker of “Dogecoin Killer,” the latest cryptocurrency to succeed on laughs alone is making its way to Binance.

When Binance announced it would list SHIB in its innovation zone (a high-risk trading feature) on Monday morning, the token’s valuation more than doubled in the space of two hours, climbing from $0.000013 to $0.000032.

The Shiba Inu website claims 50% of the SHIB token supply has been irretrievably locked into Uniswap to provide liquidity. The other 50% has been sent to Ethereum co-creator Vitalik Buterin as a “burn” gesture, however, Buterin still has full access to the funds.

The 500 trillion SHIB tokens in Buterin’s public wallet are currently valued at over $15 billion, far exceeding the value of his Ether (ETH) holdings, which are currently worth just over $1.3 billion. It should be noted that Buterin’s wallet regularly receives uninvited donations of such coins, including from numerous other Dogecoin imitators. It seems some of Shiba Inu’s perceived value stems from the notion that Buterin’s tokens will remain untouched, however, not everyone appears to be in agreement.

CoinMarketCap attributes an $11-billion market cap valuation to the token, based on a unit price of $0.00002617 and a circulating supply of 394 billion SHIB. CoinGecko has not yet attributed a market cap value to Shiba Inu, as it still hasn’t determined its current coin supply.

Binance, which also owns CoinMarketCap, announced it would open up SHIB for trading in its innovation zone on May 10. The Binance announcement said of Shiba Inu:

“SHIBA INU (SHIB) is an experiment in decentralized community building and another meme coin similar to Dogecoin.”

“SHIB is the native token of SHIBA INU and will be the first token to be listed and used as an incentive for using ShibaSwap, a decentralized exchange,” it added.

The announcement does make note of Buterin’s holdings, highlighting his and two other wallets, warning: “Please note that, as of the time of writing, the top #1, #2 and #5 wallets hold 50.5%, 7.0% and 3.0% of total supply respectively.”

We reached out to Binance to ask how the presence of half a quadrillion SHIB in Buterin’s wallet affected its market cap calculations. This article will be updated should they reply.