Home » Crypto » Elon Musk Sells $7 Billion In Tesla Stock And Might Snap Up Bitcoin, Dogecoin, Or Shiba Inu In The Coming Days

Elon Musk Sells $7 Billion In Tesla Stock And Might Snap Up Bitcoin, Dogecoin, Or Shiba Inu In The Coming Days 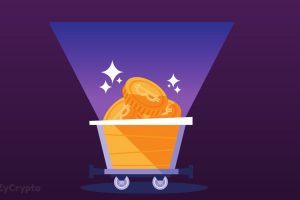 Elon Musk kept his word and has begun unloading his Tesla shares. With billions of dollars in his pocket, the Tesla CEO might be taking a major dive into the cryptocurrency markets with the proceeds.

Fresh Mint For Elon and Bitcoins?

Last week, Elon Musk carried out a Twitter poll amongst his followers to decide whether or not he should sell 10% of his Tesla stock. 58% of users voted in the affirmative and keeping to his word, Musk has begun selling some of his stock.

The first trench of sales netted the Tesla CEO over $5 billion and the latest sale of 639,737 shares was worth $687 million, with an additional $1.2 billion in Tesla stock sold on Friday. Since the announcement of the poll and the sale of stock, Tesla’s share price has been on a steady decline. The last 24 hours have seen Tesla’s share slump by 3.31% to trade at $1,033.

With roughly $7 billion in his pocket, Elon Musk can turn his sights towards the cryptocurrency markets where he has indicated a keen interest. In July, he revealed that he owns Bitcoin and Ethereum and his affinity for meme coins makes his next move somewhat unpredictable.

One school of thought is that Musk will increase his Bitcoin holdings over meme coins like DOGE and SHIB. Early this year, Musk was bullish on Bitcoin that culminated in Tesla buying $1.5 billion worth of BTC in February and started accepting the asset as a means of payment for its vehicles. Last month, Musk posted a meme that forecasted Bitcoin’s price at $69,000 and Ethereum at $4,200. Filings with the SEC could suggest that Tesla might be on its way to begin accepting Bitcoin as payment for its vehicles again.

Elon Musk has not hidden his love for meme coins and has taken to Twitter to share memes with his over 50 million followers. DOGE’s rise by over 1,000% can be traced to Musk’s antics on social media, leading analysts to believe that the billionaire could just stack up on the asset.

Then there’s Shiba Inu, another asset revolving around dogs. Shiba Inu seemed to pique Musk’s interest after he posted a photo of a Shiba Inu dog in a Tesla that sent the value of the asset to the moon. However, Musk stated that he does not hold any Shiba Inu tokens despite the enormous influence that he wields in the community.

Then comes Floki Inu, another meme coin based on the popular TV show, Vikings and Musk’s earlier tweet where he said his Shiba Inu will be named Floki. Elon Musk also posted a meme that could be interpreted as Vikings being on the moon. Since the tweet went live, Floki Inu’s price has gone parabolic and Elon Musk might be looking to add to his portfolio.