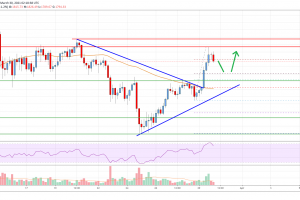 Ethereum price is now approaching the $1,850 resistance against the US Dollar. ETH/USD could trade in a range, but it could face a lot of hurdles near $1,850.

After forming a support base above $1,550, Ethereum started a fresh increase against the US Dollar. ETH broke many hurdles near $1,650 and $1,660 to move into a positive zone.

There was also a break above a major bearish trend line with resistance near $1,705 on the 4-hours chart. It opened the doors for a break above the main $1,725 resistance zone. The price is now trading well above $1,700 and the 55 simple moving average (4-hours).

Conversely, the price might make another attempt to clear the 1,840 and $1,850 resistance levels. If the bulls succeed, the price is likely to accelerate higher above $1,850. The next major resistance sits at $2,000.

Looking at the chart, Ethereum price is clearly trading well above the $1,700 level and the 55 simple moving average (4-hours). Overall, ether price could dip in the short-term, but the bulls are likely to remain active near $1,725.

4 hours MACD – The MACD for ETH/USD is losing momentum in the bullish zone.

4 hours RSI (Relative Strength Index) – The RSI for ETH/USD is now well above the 50 level.