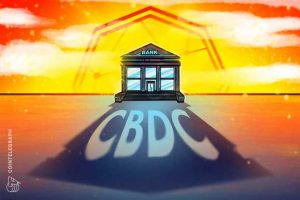 A recent study conducted by the European Central Bank (ECB) on identifying the ultimate cross-border payment medium crowned central bank digital currencies (CBDCs) as the winner against competitors, including banking, Bitcoin (BTC) and stablecoins, among others.

ECB’s interest in identifying the best cross-border payment solution stems from the fact that it serves as the central bank of the 19 European Union countries which have adopted the euro. The study, “Towards The Holy Grail of Cross-border Payments,” referred to Bitcoin as the most prominent unbacked crypto asset.

EBC’s opinion of Bitcoin as a bad cross-border payment system boils down to the settlement mechanism of the highly volatile asset, adding that:

“Since the settlement in the Bitcoin network occurs only around every ten minutes, valuation effects are already materializing at the moment of settlement, making Bitcoin payments actually more complicated.”

While the study highlighted Bitcoin’s inherent scaling and speed issues, it failed to consider the timely upgrades — Taproot and Lightning Network — that improve the network performance, concluding that “The underlying technology (and in particular its ‘proof-of-work’ layer) is inherently expensive and wasteful.”

On the other hand, the ECB recognized CBDCs as a better fit for cross-border payments owing to greater compatibility with forex exchange (FX) conversions. Two major advantages highlighted in this regard are the preservation of monetary sovereignty and the ease of instant payments via intermediaries such as central banks.

Contradicting the ECB’s reliance on CBDCs, Australian central bank Governor Phillip Lowe believed that a private solution “is going to be better” for cryptocurrency as long as risks are mitigated through regulation.

Mitigating risks related to crypto adoption can be fended off by strong regulations and state backing, stated Lowe, adding:

“If these tokens are going to be used widely by the community, they are going to need to be backed by the state or regulated just as we regulate bank deposits.”

In Lowe’s view, private companies are “better than the central bank at innovating” the best features for cryptocurrency.