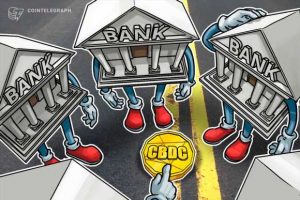 HSBC Group CEO Noel Quinn penned an article, New forms of digital money could spur growth, outlining the firm’s commitment to supporting the concept of CBDC as it provides transparent legal tender designed to avoid “many risks” associated with cryptocurrencies and stablecoins.

The CEO went on to say that stablecoins and cryptocurrencies will require regulation that is equivalent to the extent of associated risks as the industry adoption grows further. “Even then, only designs that are sufficiently well anchored to achieve price stability, and correspond with current approaches to financial crime prevention, are likely to be useful as a reliable and safe means of payment,” he added.

While expressing skepticism over crypto, Quinn emphasized that HSBC will continue deepening the experience of cross-border payments and the global CBDC development. He noted that the bank had been actively working with many central banks including those in the United Kingdom, France, Canada, Singapore, mainland China, Hong Kong, Thailand and the United Arab Emirates, to contribute to their CBDC projects.

HSBC is one of the world’s largest banking institutions, reportedly being one of the largest debt buyers of troubled Chinese real estate developer Evergrande alongside investment giant BlackRock. In contrast to BlackRock, which has been actively moving into crypto recently, ​​HSBC has emerged as one of the biggest skeptics of Bitcoin (BTC) and the crypto industry in general.

In August, HSBC was among British banks that opted to cut payment channels Binance over “concerns about possible risks” to its customers. HSBC previously blacklisted the stock of business intelligence firm MicroStrategy as part of its user policy prohibiting customers from interacting with crypto.