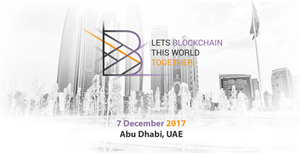 The blockchain industry has been developing more rapidly than the boldest forecasts predicted. Having become an integral part of the financial and banking spheres, it has already occupying its niche in medicine, insurance, document circulation, energy, retail and other economy spheres. Today, the blockchain is blooming. However, it is worth knowing what we may expect from the technology in the next 6-9 months.

On December 7, 2017, Abu Dhabi will host for the second time the main blockchain conference of the MENA region – Blockchain Conference Abu Dhabi (BConference), which will bring together representatives of the blockchain industry from around the world to talk about their successful experience of using the technology in the most relevant areas for the region.

The key topics of the BConference Abu Dhabi 2017 include:

The crypto-currency market capitalization has approached the $ 143 trillion mark in 2017. Governments, investors and business are actively developing plans on using the blockchain to enter the list of the most technologically advanced countries in the world. For example, in October 2016, the authorities of the largest city in the UAE, Dubai, announced the launch of a blockchain strategy to become the first city operating on the blockchain technology by 2020.

One of the BConference panel will be devoted to the preliminary issues on the crypto-currency and blockchain market review, the possibilities of their use within the country and beyond its borders, the analysis of successfully implemented cases. In addition, the participants will get acquainted with the projections and prospects for the blockchain development in the Middle East Region.

Researchers from the British HR agency Robert Half Financial Services have found that 52% of the world’s financial services companies plan to implement the blockchain as it facilitates transactions, increases their speed and reduces the costs for the parties. According to the study of the TABB group, the blockchain will enter the daily life of all financial companies by 2026.

The world commerce volume, excluding oil, in the emirate of Dubai in the first 2 quarters of 2017 has amounted to approximately $ 259 billion, which makes it a major trade hub connecting the markets of Asia, Africa and Europe. The blockchain or the distributed ledger technology will reduce the amount of customs documentation accompanying all movements of goods and will allow their suppliers and recipients to track all processes and the compliance with the terms and conditions of supply contracts in real time. The authorities of the emirate together with IBM and a number of other companies are already working on the creation of such blockchain platform.

The blockchain has already been successfully used to exchange surplus solar energy in the US and Australia, where full-fledged virtual exchanges have been created for this purpose. In the experts’ opinion, a decentralized approach in the energy market will make it possible to significantly reduce costs not only by eliminating intermediaries in the energy market but also by using local energy exchange as needed. It is most likely that the blockchain will become a means of updating and improving existing centralized energy systems as well as create a mixed distributed system where both large power plants and micro networks will participate.

The decentralized data transmission system has already been actively used for the purpose of technological modernization of the healthcare system. The study of the blockchain technology potential is carried out in terms of its use in the diverse medical administration starting from the basic client data commit process and ending with the monitor of the development and treatment of the patients’ diseases.

The initial coin offering (ICO) is challenging some other ways of the fund raising. In 2017, the start-ups have already raised 10 times more funds through the ICO than in 2016. According to a research firm in the crypto-currency field Smith & Crown, in 2017, the blockchain start-ups have raised over $ 1 billion through ICO. The unconventional method of investment generation is almost as efficient as the usual IPO.

To participate in the Blockchain Conference Abu Dhabi, please register on https://bconference.org/